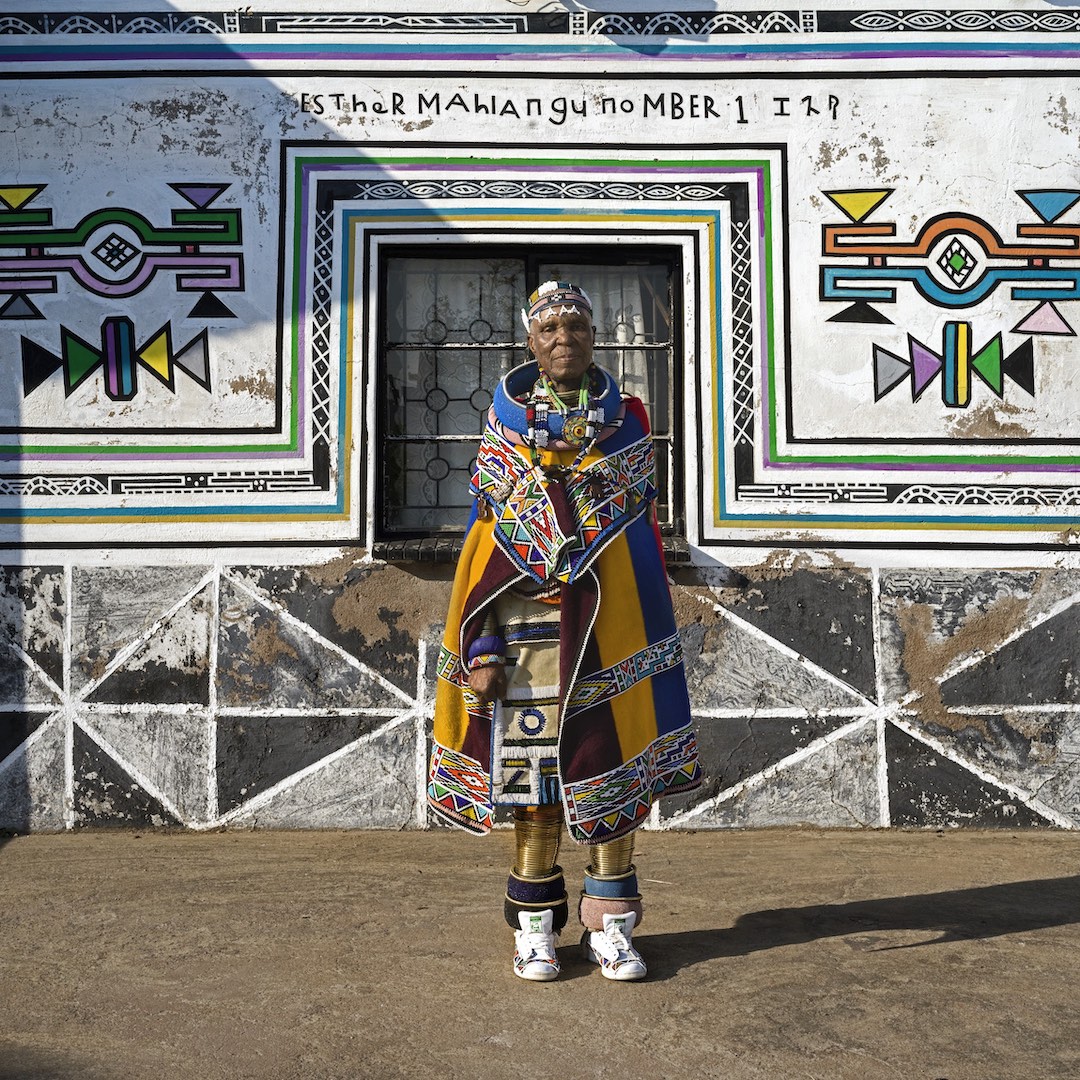 The doyenne of modern Ndebele art is about to open her largest ever solo, and it’s happening right here on home soil.

Toasting to her 85 years of life and a career spanning over seven decades, Dr Esther Mahlangu’s solo exhibition entitled Esther Mahlangu 85 will open at The Melrose Gallery on Friday, 20 November 2020. The South African self-taught artist whose bold Ndebele inspired paintings are collected and exhibited all over the globe needs little introduction. Her colourful geometric artworks are recognisable to most as a contemporary link to the traditional painted walls of homes in rural Limpopo and Mpumalanga. Having contemporised these traditional motifs by adapting them to new mediums, Esther has pioneered a modern African art form.

For Esther, the paintings uphold her heritage and serve to fly the flag for her culture, keeping her ancestry alive. It’s a calling, she believes, and one she has no intention of stopping prematurely. For her patrons (the likes of Oprah Winfrey and Usher), works by the artist have steadily gained in value, with exhibitions at the Museum of Arts and Design in New York, the Guggenheim Museum, Bilbao, the National Museum of African Art at The Smithsonian Institution and most notably at the Centre Georges Pompidou in Paris, to name a few. Her work could be seen on the tails of the 1997 British Airways airplanes and she famously collaborated with BMW in 1991 and Rolls-Royce more recently, adorning these luxury cars with her iconic Ndebele graphics and thus pushing the boundaries of traditional art mediums.

But in her 75 years of painting, the artist’s work has had significantly less exposure here at home, providing fewer opportunities for her people, the South Africans, to take in her paintings and interact with them in person. Now, just days after her 85th birthday, The Melrose Gallery will be opening her largest solo exhibition to date with a monumental body of work produced over the past three years and curated by Ruzy Rusike. Ruzy explains:

95 percent of Dr Mahlangu’s artworks are going to international museums and private collectors and it is vital that more of her works are retained in the country of her birth.

You can expect her characteristic geometric paintings executed using a chicken feather and acrylic paint with a scale of up to 3.6 x 2.4 meters, a succession of 85 smaller paintings at very accessible prices, as well as a series of brand-new sculptures. The latter is a first of its kind in that her paintings have adorned all manner of three-dimensional objects, yet they’ve never been created as sculptures in their own right, by the artist, for her own body of work.

“There is an exciting tension between the traditional nature of Ndebele design and the modern contemporary mediums and scales in which her works have been presented on this exhibition which makes them as relevant in an apartment in New York as a home in Johannesburg,” adds Ruzy.

The artist’s Retrospective Exhibition will open in early 2023 at The Melrose Gallery and will continue to tour the world for three years after. Then there’s her imminent handbag collaboration with businesswoman and TV presenter Carol Bouwer to look out for, as well as two enormous 16-meter long paintings which will soon be installed at Southgate Mall. Given the above, there’s no sign of this legendary octogenarian artist slowing down any time soon.

“These artworks that I create remind me that art will help you in terms of knowing that we are all people. The blood that we have running is the same. And that’s the beauty of art,” she says.

Esther Mahlangu 85 can be viewed online from 11 November and at The Melrose Gallery, Melrose Arch, Johannesburg from 20 November. The exhibition runs until 20 December.