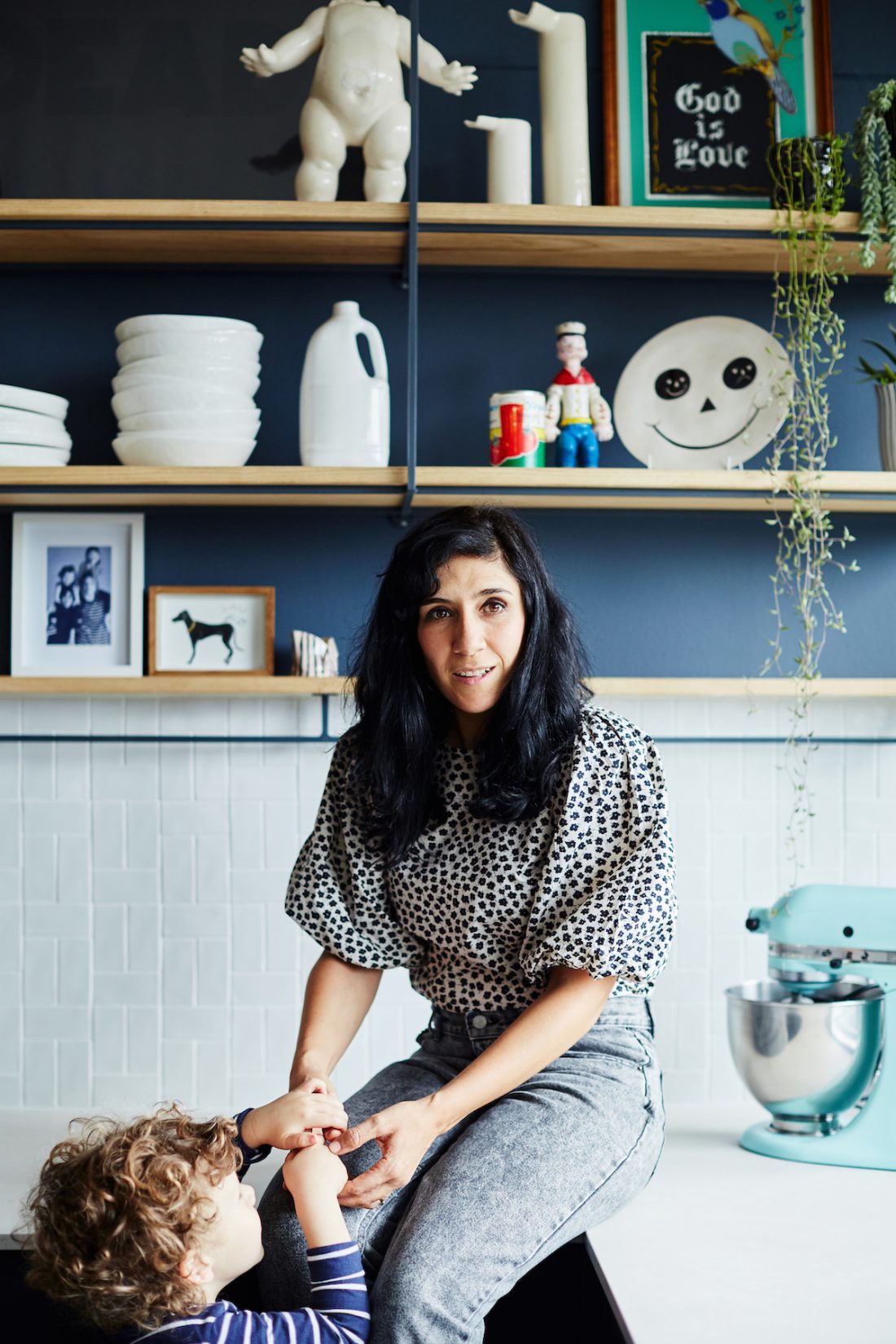 We unveil the brand-new kitchen that influencer Angie Batis-Durrant has been working on during lockdown and ask her for some pointers.

Any of @missluckypony’s 33 000-odd Instagram followers will have become acquainted with her kitchen. The blogger and content creator – known to friends and family as Angie – has a grid that’s dotted with regular posts of dangerously good baked delights, sweet treats and home cooking videos, all snapped with her expert eye from her Illovo apartment.

Even the odd appearance by her husband, Desmond and the Tutus lead vocalist Shane Durrant (or Mr Lucky Pony if he was formally given the title) takes place in the little kitchen with its black and white tiled splashback and open timber shelves. (those keen for a laugh should watch his Lockdown video on Weekend Pancakes).

Almost since the day they moved into their apartment many years ago, they’d talked of renovating the kitchen. Renovate is not quite what they did in the end… start again is more like it. “I bake and cook so much (for my work too) that I spend a lot of time in the kitchen and just about every time I’ve stepped into it to make something, I’ve spent at least 3 (and half) minutes daydreaming about what my ‘real’ kitchen would look like one day,” Angie says.

Having simmered over the idea for years and been given the nudge by a friend, they launched ahead: building an entirely new kitchen where the lounge once was on the opposite end of the living area. In its new position, the kitchen is not only open to the lounge, but also thrust into the north light overlooking the busy street. The new space is contemporary and sleek and manages to hide the ugly bits (like pantry goods and appliances) and show off the pretty bits with beautiful finishes like Caesarstone tops and open shelves with a nifty utility rail. It also bucks the old formula of keeping one’s sink, stove and fridge in a triangle, in favour of “what felt right.”

The nice thing about living here for so long before renovating is that we spoke through every single option - we definitely didn’t rush into something that would age or date too quickly.

The kitchen island allows for a much more social dynamic among Angie, Shane and their two school-going toddlers and gives them a place to hide their washing machine, as well as adding to the new inventory of storage options now available.

“This flat had a formal dining room and space for two lounges, so it was really designed on a traditional model. By reconfiguring the space as we have done, we’ve ended up with an enormous kitchen (given that it’s now a social space too) and we’ve really upped the storage capacity from our original setup.”

They’ve shared some of their approach with us below.

Some plans just won’t go your way. When a traditional solution is not an option, think creatively. “Our electrician managed to pull enough new wires through the existing conduits for all the plugs and isolators we needed, but with the plumbing we had to get creative. Fortunately,  we’re blessed with lovely neighbours who allowed us to tap into their hot and cold water supply for our sink and washing machine through a shared wall (our building doesn’t meter water).

The other plumbing challenge was that we needed to surface mount all the new piping; the solution to this was a neat waist-high false wall that runs along the back of the cupboards and becomes exposed as a picture rail in the lounge, hiding all the piping.

For a splashback that was a little more unique but still cost-effective, we bought some off-the-shelf mosaics, ripped the tiles from the backing mesh and laid them out in a slightly more interesting pattern to the original.”

“Part of the challenge with an open plan, lofty space is that you can’t hide the mess, and with two work-from-home parents and two pre-school age lighties, there’s a fair amount of mess around. Our fridge, pantry and microwave are concealed in the large cabinet unit and as for the dishes, well, Shane happens to be that rare breed of human that finds soapy joy in washing his own dishes. We have also concealed the washing machine in a cupboard, so at no point are you forced to see any ugly appliances when you’re chilling in the lounge or sitting in the dining room.”

WHILE YOU’RE AT IT, THINK BIG

“When we bought the place eight years ago, we did a few little things to get the flat in line with our tastes, but pretty quickly we started having ideas for a big renovation. The idea actually came from my friend Chloe, who said that families spend so much time in the kitchen, but in the design of these old flats, the kitchens are jammed in the corner. Armed with that notion, we began the journey of not only planning an upgrade but figuring out how to put our kitchen on the opposite end of the flat.”

“Storage and counter space are key to achieving the balance between a hardworking kitchen and a beautiful one. We needed enough space to stash every plate, pan and appliance, so that the all-important counter wasn’t jammed with stuff. We had the basic layout for the kitchen worked out, but we reached our final design with the help of Mimo Architects and our great carpenter, George Stacy of Woodgrain.

The most important addition was always going to be the island. Having the available worktop space is handy because you can really spread out when you’re prepping and the generous island has made a central feature of our kitchen. Honestly, having a more social, central kitchen has transformed mealtimes for us; our poor dining room table hasn’t seen us in months!”

“We saved on the cabinets, which can be hellishly expensive when you start looking at the high end. We were very lucky to have met up with George, who is an old-school carpenter and makes everything from scratch, avoiding the expensive drawer casings and so on, but still managing to get us the slick seamless finish we were after.

The concealed fridge was our big-ticket item and one we don’t – for a second – regret spending on. Because our kitchen is so large now, and with the space being so open – it would have been odd to have had a regular fridge on show. Our fridge is now concealed within the pantry unit which doesn’t read as a 2-metre-long kitchen cabinet in the middle of an apartment.”

LOVE TO LOVE PRE-LOVED? Our cheat sheet to some o

CAKES SO EPIC WE SHOP THE LOOK...⁠ ⁠ Moscow’

SUMMERTIME, AND THE LIVIN' IS EASY...⁠ ⁠ Featu

MOMENTS LIKE THESE⁠ ⁠ ...make a house into a h

ARCHITECTURE IS NOT AN AESTHETIC DISCIPLINE...⁠

THE PHOTOGRAPHER OF THE MOMENT⁠ ⁠ Trevor Stuur

PORTUGUESE SOPHISTICATION...⁠ ⁠ In this serene

THE ROMANCE OF GRASS...⁠ ⁠ There’s a fuss in