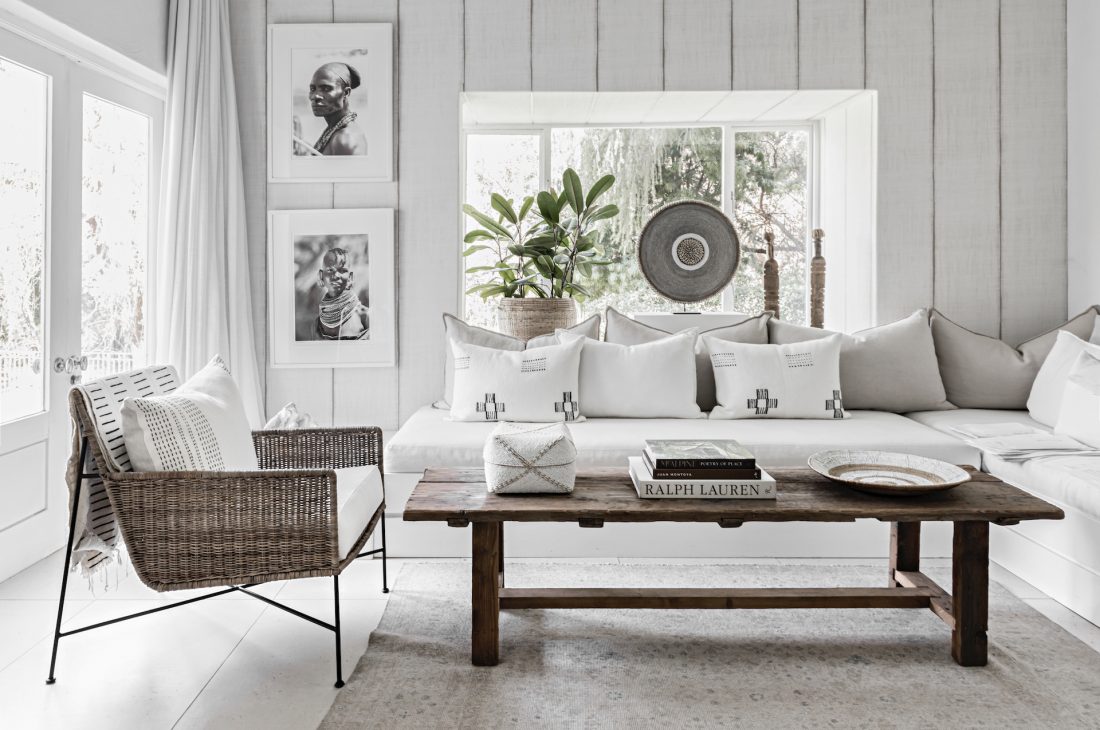 Join us as we tour this interior designer’s pared back, renovated Joburg abode and discover how she has gained space, but not square meterage.

Having taken notes from our recent Decorating story, you’ll know that interior designer and owner of The Private House Company Yvonne O’Brien is a past master when it comes to layering neutrals and naturals. If done right (and trust us, she does it right), the result of said combo is utterly calming thanks to the mix of lighter shades and raw texture. Her own recently renovated 4-bedroom home in Dainfern is ground zero for this ostensibly laid-back yet skilfully measured look.

“We bought the house for its fantastic position and with the aim of being our family home. It looks onto three huge weeping willow trees and a little stream with no other houses in sight,” Yvonne recalls, the mere fact that this home – in one of Joburg’s largest estates – has a view that excludes any neighbours is reason enough to buy. She adds though, that “the house needed a lot of work”. Having chipped away at it over the years, tweaking this and redecorating that, Yvonne and her family were at the point of selling up and had been looking for another house on the estate that could offer more space. But with all the right factors. In the end, they decided nothing quite matched up to what they already had, and a major renovation ensued.

Ironically, they didn’t expand on square meterage at all, but instead achieved the illusion of space by way of two main factors: increasing light to the interior and removing wall divisions. More specifically, Yvonne added new skylights to flood the space with natural light and removed the internal walls separating the kitchen, dining and living room, thus creating a much larger open space with a communal feel. She also installed more windows and new sliding doors which, when hidden in the wall cavity, maximise on flow between the inside and the veranda. The latter was also extended further into the garden and now serves as an all-seasons hangout for the family.

Last in the list of space-making tricks was the removal of her richly coloured terracotta floor tiles in exchange for large format bone coloured porcelain tiles that span indoors and out, again coaxing the eye into the illusion of expansiveness by way of continuity.

Yvonne’s legendary penchant for fusing white, neutrals and raw texture also plays its part in lending this abode its pared back and restful mood. Here, sofas slipcovered in white linen pair harmoniously with woven furniture sourced almost entirely from her collection at The Private House Company. “My furniture changes as my preference does. Because I’ve got a shop, if I bring in something new, naturally I love it and I’ll want to try it out in my own home,” she admits, but is quick to add that some pieces never change. Her dining room table has been a mainstay for 10 years and her dining chairs have also lasted for their timelessness, both of which are still sold in her shop.

Most days, no matter the season, the family find themselves on the deep veranda. Here, plush armchairs, generous coffee tables, seagrass matting and a liberal dining set up await bare-foot relaxation while a built-in fireplace and blinds are at the ready for anything the elements bring.

SA DESIGN ROUNDUP We recently shared some of our