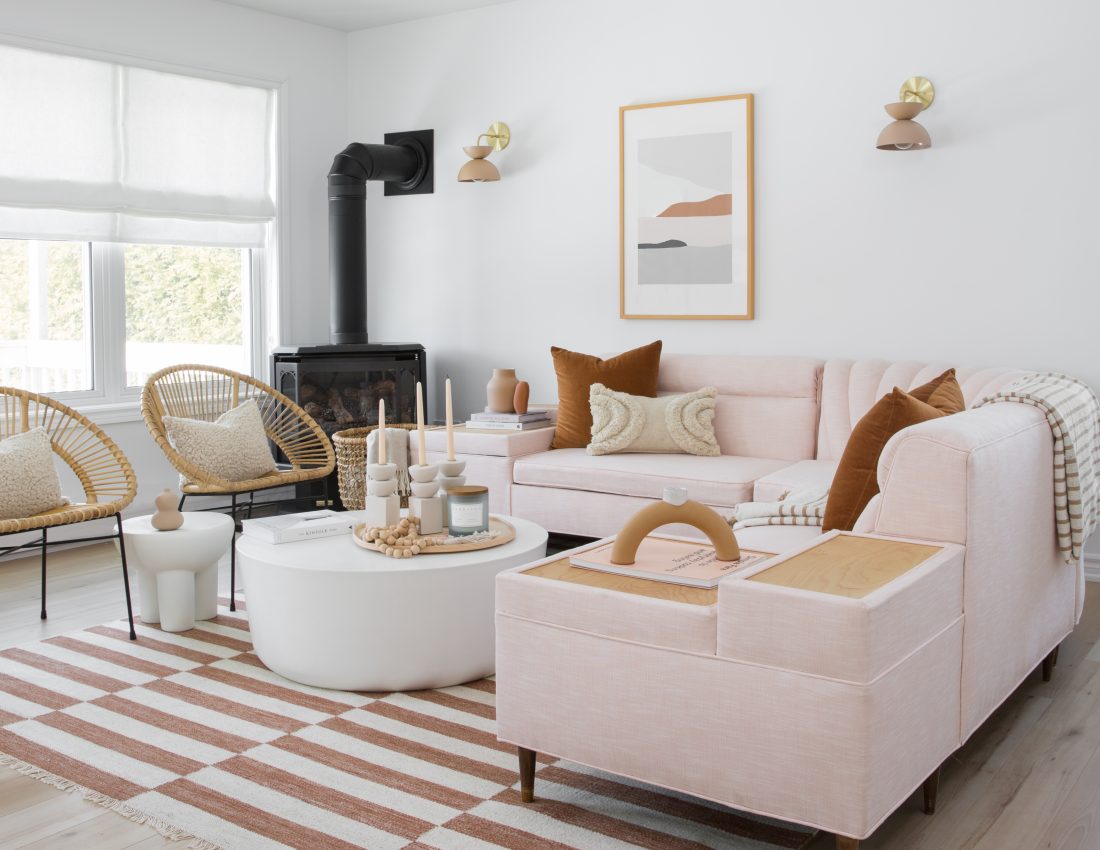 When interior designers Tiffany Piotrowski and Autumn Hachey were approached by a client requesting they collaborate on a design overhaul of a cottage on the shores of Lake Huron in Ontario, Canada they couldn’t wait to check out the space. Situated in the suburb of Southampton, once renovated the cottage was to be marketed as an Airbnb summer lake rental. But on viewing it, their first reaction was, as Tiffany puts it, “a little bit, well – underwhelmed.” Before them stood a three-bedroomed property with interiors kitted out with dated furnishings, dirty fitted carpets, green-beige walls and no shortage of stucco ceilings to make up for (and round off) the complete lack of charm. “It felt a long way off from the bright, summery destination space that our clients tasked us to create,” says Tiffany, founder of Tiffany Leigh Design.

With a confirmed client brief rich in evocative adjectives, the tight budget was next up for discussion. “When it comes to renovating a rental property, the client’s return on investment is the number one priority, and every dollar has to make sense in terms of what can be recouped in rental income,” says Tiffany. Their work clearly cut out for them, this consideration was to set the tone for many of the clever design choices the pair was to make.

Many months later, upon completion and when handing the cottage keys back to their client, Tiffany and Autumn left behind them what can easily be described as one of Airbnb’s prettiest and most feminine rentals. Tiffany refers to the Summer House as “the epitome of a boutique getaway experience”, whilst Autumn – who owns Make Moves Vintage furniture store – sums it up, in true millennial fashion, as “super-Instagrammable.” And with a combined Instagram following of close on 50 000 followers, both designers have proudly posted images of the project, the cottage’s soft pastel palette perfectly assimilating with the curated aesthetics of their respective accounts.

So what is it about the Summer House that makes it so visually striking? And what astute design decisions result in it having such charm? We take a closer look at five approaches key to the designers’ thinking.

Save on the TV, splurge on the sofa

“Our client didn’t want a TV in the house, as it is meant as a true retreat from the modern world, a place to reconnect with friends and enjoy the nearby beach,” says Tiffany. The impact of this was key to the pair’s planning of the living space. Freed from having to mount a television on the room’s only expansive wall, Tiffany and Autumn were able to configure the living space in a way that allowed for the most social interaction, with the sofa facing the open-plan kitchen rather than away from it. Having its back against a large wall also meant that the sofa could be lengthier and modular. Autumn selected a 1970s sectional sofa from her store. “We had the statement-making piece reupholstered in a blush pink indoor-outdoor fabric,” she says, “In a rental space, a low-maintenance durable fabric is perfect for spilled wine or sandy feet.”

Recognising that the kitchen island, with its generous surface, was in close proximity to the compact dining area, neither designer saw the need to accentuate the diminutive size of the space by installing a large dining table. “We ditched a traditional dining table in favour of three small bistro tables,” says Tiffany. “The flexible café-style seating makes it suitable for a quiet morning coffee or a boisterous family dinner.” A custom-designed banquette was installed, not only for added seating, but also as a nifty storage solution; its hinged top allowing for packing room beneath the seat. In a small space, such examples of dual-purpose functionality are clever thinking, and allow – in this instance – for the bistro tables and chairs to double as additional patio furniture if needed.

With curves introduced as a motif throughout the cottage, the design duo sought ways to bring the form into an otherwise boxy kitchen. Their solutions for doing so not only reveal their dexterity working with a limited budget, but also reflect their understanding of how to introduce prettiness into a practical space. Transforming the existing rectangular island into a curved one through simple DIY techniques allowed the designers to modernise the room, with the introduction of half-round dowel cladding softening the space. “In a short-term rental, kitchen storage isn’t as important as it is for everyday living,” explains Tiffany of their decision to ditch the upper kitchen cabinets. Replacing them with open shelving was an opportunity to display pretty accessories, as well as to counter the overall room’s curved forms with a linear vertically stacked, matte subway tile backsplash. “We chose beautiful pottery and dishware that is artist-made. We were really selective with the colour palette because it’s all going to be on display,” adds Autumn, who recommends sticking to a cohesive set of hues when accessorising open shelves.

Get your board game on

Knowing that the client wanted bed linen that was white and hotel-like meant that Tiffany and Autumn had to find other ways to add impact to the three bedrooms. Oversized, texture-rich headboards became the playful solution, their drama adding whimsy and character. From a channelled velvet headboard spanning the full length of a wall to two playful rattan designs in the bedrooms upstairs, all three were custom-designed. Referencing the headboard in the pink-walled bedroom, Autumn explains, “it’s oversized and rattan and built in a way that the side tables live in their own little sections. We added sconces that were mounted right on to the rattan.” Given their mostly shallow depth, using headboards to create drama is a practical way of ensuring minimal space is wasted.

“While we love a bright, white space we felt it was crucial to introduce warmth,” comments Tiffany on the cottage’s distinctive tones. Nudes, pinks and rusts, with some hardware and fixtures in brass, were agreed upon as the overriding palette for the cottage. They dominate and lend consistency throughout, save for in one bedroom where a pale lake-blue hue features. Its addition contributes as much to the beachy mood as the warmer tones do. Working with such a limited palette throughout a compact home allows one to swap accessories across rooms, thereby keeping spaces fresh. Additionally, for this project it meant that when the designers collaborated with Studio Bicyclette, a branding team, on the brand identity of the Summer House, the palette could carry through into the marketing material.

Summer House: Get the look

*Products and prices checked at time of going live. Whilst every care is taken to ensure accuracy, Lifestyling.co.za (and the suppliers featured) cannot be held liable for any errors.