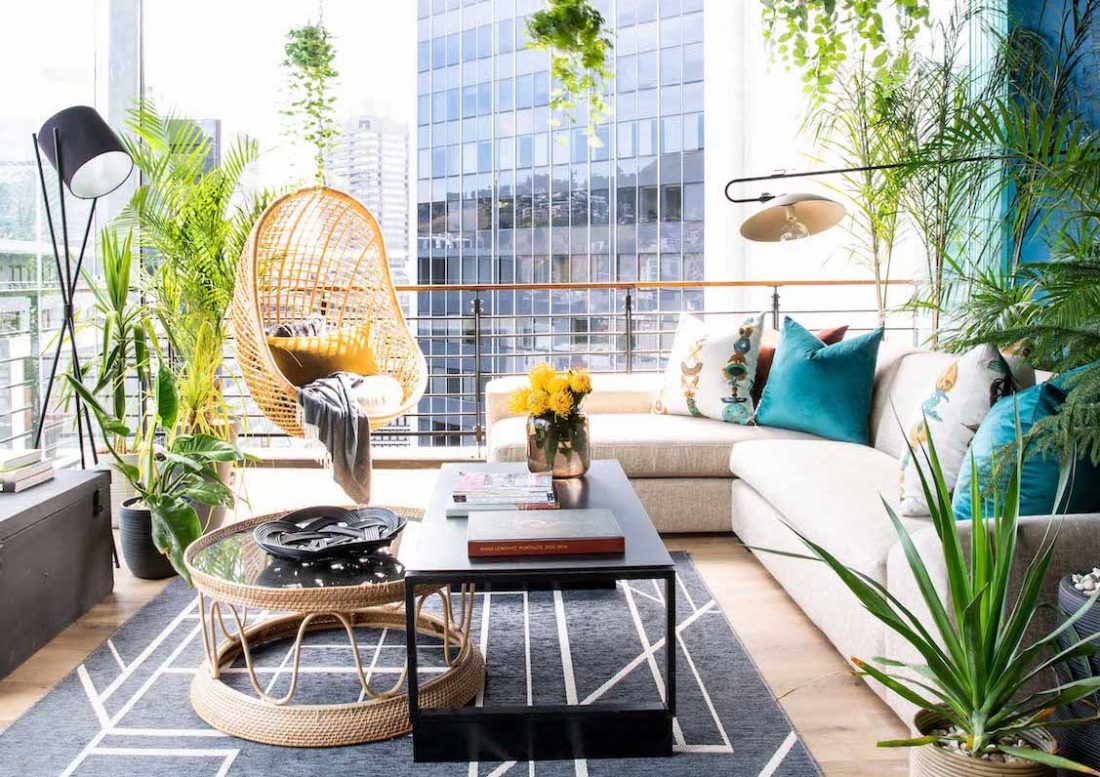 How to master the industrial look, by way of this commercial space turned four-floor penthouse in the heart of Cape Town.

What is it about rooftop views across a city that intrigue and mesmerise? The glimpses they reveal of water towers and hidden balconies unseen from street level? The voyeuristic sneak peeks they offer, Edward Hopper-like, into corporate offices across the way or into unexpected residential spaces that only come to life after dark? For Nicholas Garrett, owner of a rooftop multi-storey penthouse in the heart of Cape Town, overlooking the city’s historic Greenmarket Square, the appeal was all this and more.

Coupled with the thrill of living eyrie-like amongst some of Cape Town’s oldest and most decorated buildings was the exciting opportunity for Nicholas to convert a former commercial space into a home, one rich with personality. Enlisting the help of ONE Design and Development’s Anlo Neethling was a natural starting point for Nicholas and key to the success of the undertaking. With more than a decade of experience in interior design, project management and construction, along with an eye that favours the bold, Anlo’s involvement has been ongoing rather than turnkey, with yearly contributions to the evolution of the space. “From the get-go my client had a very clear vision for the space,” says Anlo, “this not only included incorporating his most treasured furniture pieces – which luckily worked well within the apartment – but also involved paying respect to the building’s past. This I achieved by introducing an industrial and masculine aesthetic, one that would reference the former use of Nicholas’s home as an office space.” Five years after taking on the project, and after multiple evolutionary changes he’s implemented in the home, Anlo reveals his secrets to mastering an industrial look.

“Black is key to a strong industrial feel, and also adds a masculine and modern edge. I’ve used it throughout the home, from the elevators’ original sliding doors at the penthouse entrance to the kitchen joinery, and from the custom-made lighting fixtures to the metalwork on the staircase,” says Anlo. The rich, bold colour is also repeated on the walls – it was Anlo’s choice of paint colour in the dining area, and his preference for tile tones in a bathroom. Black also makes a striking statement in a triptych by artist Rachelle Hugo, purchased from Ebony, which hangs in one of the living rooms. Anlo’s inclusion of saturated jewel tones is also noteworthy. Commonly considered a winter palette, the use of jewel tones here has broken with convention, not only by becoming masculine in mood but also by its inclusion in outdoor spaces like the sun deck and in the conservatory. “Jewel tones can definitely work in a summery context, just be sure to pair them with cooler tones and light surfaces like marble or porcelain,” he says, referring to one of his favourite spaces within the penthouse, the conservatory. Previously an underutilised outdoor room, the space – with its retractable windows, custom-designed magenta server with built-in bar and Weylandts hanging chair – now functions as a cosy cinema lounge, one with captivating city views.

“Sadly, very few of the apartment’s original features could be retained, although I did ensure that we kept the wonderful doors leading to a stairwell that links two of the floors.” As a nod to the building’s history, Anlo introduced an exposed brick wall in one of the bedrooms. Like the custom-manufactured copper mixers in the bathrooms and kitchen, the brick finish adds to the industrial-chic nature of Nicholas’s vision. Its materiality, like the use of leather on surfaces including the dining chairs by Dark Horse, the custom-made ottoman in the living room and the backrest for a lounger that hangs below Rachelle Hugo’s triptych, is masculine. Along with a variety of hardwearing fabrics that repeat throughout the penthouse, many from Hertex and most with heavy weaves, such finishes as leather and cement-screed floors contribute to the boldly modern industrial feel.

“While Nicholas had a ‘big picture’ vision of his home from the start, once it came down to selecting art, objet and accessories, he was more than happy to give me free rein,” comments Anlo on many of the finishing touches to the apartment. “When sourcing for the home, I balanced the newly purchased with a combination of locally designed pieces and vintage or antique finds.” The historical richness of such vintage items, like an office chair found in a used-furniture store in Woodstock and repurposed in a bedroom, or a timeworn fire extinguisher used as a doorstop, allude to the space’s former use. Other collectables, from a pair of timber candlesticks that have pride of place on the open dining shelves and sourced from Ride A White Swan, to glassware on a coffee table, speak of bygone times and add a sense of heritage to the layering in the home.

MAKE YOUR HOUSE A HOME ⁠ ⁠ Ranking as one of t

A FINISHING TOUCH⁠ ⁠ They may be small, consid

A SLICK ADDITION TO YOUR KITCHEN...⁠ ⁠ The col

STILL LIFE IS AN ARCHAIC SUBJECT MATTER, SO HOW DO

BURNING UP FOR FLAME STUDIOS⁠ ⁠ Since opening

BATHING IN THE WILD...⁠ ⁠ If you're not alread

KITCHENS GET THEIR GAME ON...⁠ ⁠ With brands l