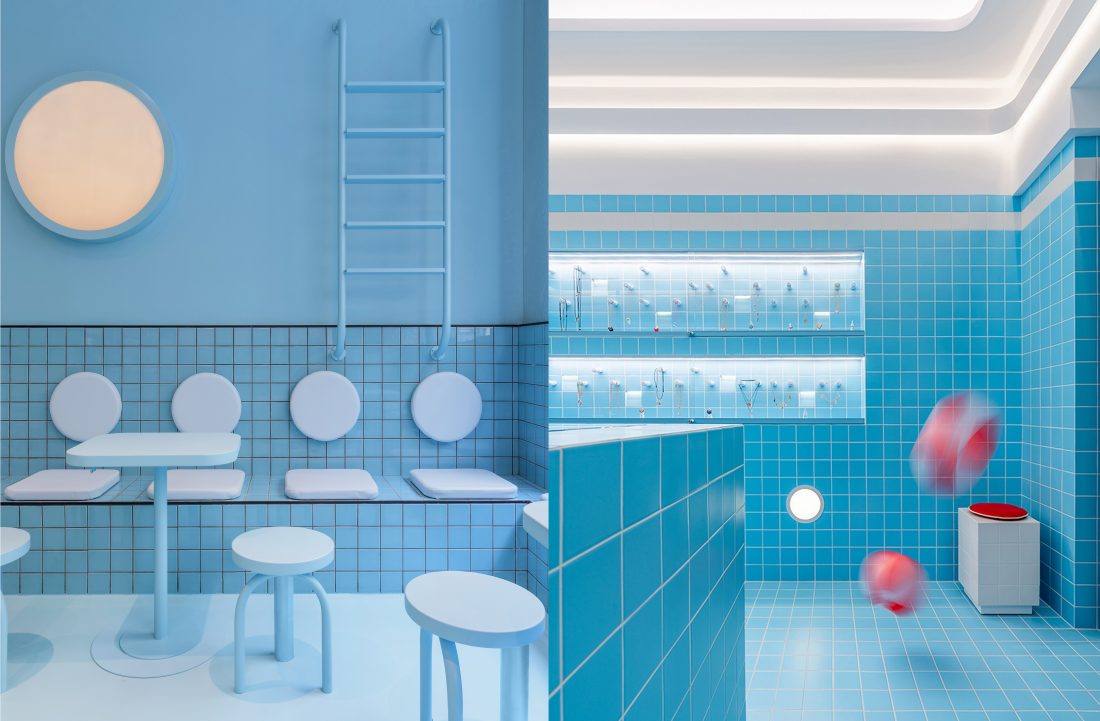 As swim season draws near, we ask whether making a splash while remaining dry is design’s most refreshing new trend.

While we braved the chill of a particularly biting winter, two Mediterranean retail spaces (Bun Burger, above left, and Gavello Nel Blu, above right) opened their doors in time for the European summer. Designed independently of each other, their conceptual similarity suggests the potential for a cool new trend, one that sees designers creating spaces that dive right into the summery pool motif.

What is it? Bun Burger is the second interior design project creative consultancy Masquespacio has completed for Bun, an Italian hospitality chain with its first restaurant in Milan. For the Milanese restaurant the design duo used the historic building, home to the eatery, as a starting point. For the Turin space the starting point was entirely different – three windows that offer views directly from the street into the restaurant. “The idea to play with a single colour within each window creates a visual effect from the outside that makes the spectator walk from one visual world into another, traveling through different experiences within the same space,” says Ana, creative director on the project. The green colour is what diners associate with the Bun brand and leads customers to the order bar, while the duo’s use of pink and blue is for seating zones.

The splash factor Bun Burger’s blue zone is a seating space that adds whimsy and playfulness to the interior. Visitors to the store are invited to enjoy their meals in a space that simulates a swimming pool. Pale blue dominates the zone from floor to ceiling, with banquette seating, stools and tables all in the monochrome shade. Small square tiles (also used in the other zones) and strategically placed pool ladders complete the effect.

Lifestyling loves The finishing touch to the blue zone is without a doubt its metal roof. Its ripple effect not only reflects light and appears to shimmer, but ingeniously creates an underwater effect.

What is it? “Gavello Nel Blu is a jewellery shop that thinks it is a pool,” says multidisciplinary studio Saint Of Athens’ creative director, Nikos. “Cosmopolitan and picturesque places like Mykonos tend to trap themselves in the opposing pulls of rigid tradition and forced extravagance. Here, the aim was to show that a few square meters of retail space are sufficient for interior design to show its surreal and ingenious side and for opulent products to acquire a whole new market context.” The store has a typical Cycladic façade with an interior designed to resemble a pool. The Italian brand’s jewellery is displayed inside four niches embedded within a tiled wall and lit by LED strips. The rectangular table that dominates the interior displays additional jewellery.

The splash factor Much like at Bun Burger, light blue square tiles and a wall-mounted pool ladder evoke a summery mood – in this case one that’s particularly appropriate to the island. Nikos and his team have included practical elements such as mirrors, cushions and display cases as well as conceptual props that enhance the pool concept.

Lifestyling loves The additions of branded red and white inflatable beach balls, as well as striped bolsters in the same colours extend the pool motif, while introducing a sense of retro glamour. We love the red lockers that complete the look.