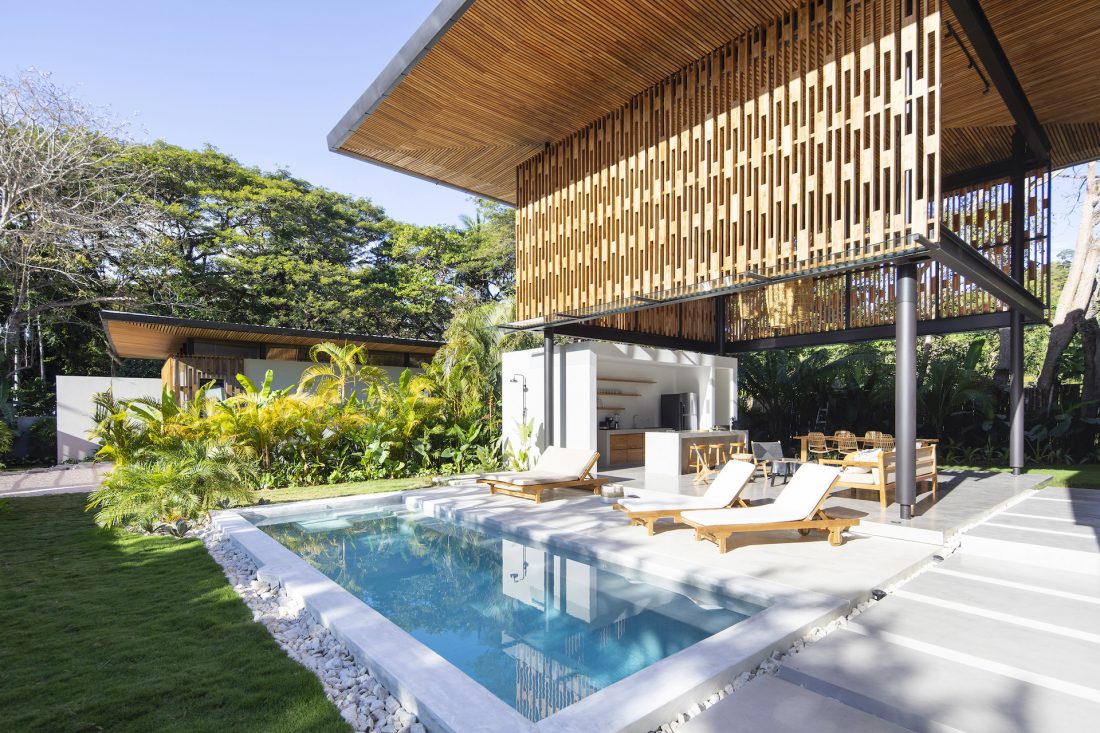 An architect’s clever use of steel structures and slatted timber screens in a Costa Rican jungle stretches the parameters of inviting the outdoors in.

When commissioned by a client to design two adjacent houses a short walk from Costa Rica’s Santa Teresa coastline, architect Benjamin Garcia Saxe seized the opportunity to blur the boundaries between natural habitats and inhabited spaces. It’s what his award-winning practice, Studio Saxe (with studios in Costa Rica, Los Angeles and London), does best. Dramatic roofs that seemingly float above open living spaces characterise many of his projects, from a yoga retreat hotel to a handful of strikingly beautiful residences scattered across the island country. There’s little separation between indoors and out in many of these projects, and this same approach sets the tone for this commission.

A jungle-like forest, verdant and echoing with birdsong, covers much of the site and its surroundings, and it’s this that Benjamin set about integrating into the design of the homes. “I decided to blend the tropical jungle into the houses whilst creating bioclimatic comfort for the homeowners to enjoy the outdoor experience,” says the San José-based architect. “The homes are composed of generous rooflines that create shelter and the possibility of living outside within nature.”

Reforested teak screens form the overhanging roofs and some walls in both homes. These screens, often patterned, were designed to create dappled light that plays across expanses of white wall. They also protect from the rain. Benjamin explains, “By creating an identifiable roofline, we could then use it to create a language of architecture for both large and small scale.” The roofs are designed to collect water that can be used for garden irrigation, with each home’s hot water heated by solar panels. Both homes’ living and entertainment areas are generously ventilated, and the steel structures that allow for this also allow natural light to fill spaces, thereby reducing reliance on electricity.

Naia I and Naia II, as the two homes have been called, were created for the same owner. The first is a single storey home that opens up to an interior garden and pool. Covered by an overhanging roof, the 251 square metre residence has three bedrooms, each en suite. An open walkway bisects the home. To one side of this passage are the shared spaces, with bedrooms on the other side.

For Naia II, the larger of the two homes and double storey in design, vertical screens forming a cube create a double volume atrium that allows the homeowners to enjoy the natural light as well as the outdoors while sheltering them from the elements. The home has three bedrooms and relies on a similar walkway to delineate public and private areas. The primary living room is almost entirely open to the elements, with only the kitchen ‘resting’ against a solid wall. “The main living space comprises a lightweight frame that contains the open spaces and welcomes nature in,” explains Benjamin.

In contrast to these steel structures designed for maximising indoor-out living, both houses boast bedrooms with concrete walls. The use of this material makes these rooms much more enclosed, and independent of the main steel structure. According to Benjamin, it’s this paired system of steel structures and smaller concrete rooms that adapts for the assembly of a bigger or smaller house. Studio Saxe, along with interior designer Cristina de Freitas, opted for minimalist and understated finishes to compliment the site’s tropical setting. The wooden furniture matches the teak roofs and patterned screens. These pieces are clean-lined and used sparingly, a conscious decorating decision that encourages the homeowner’s focus to be drawn outdoors. Polished floors, too, serve to focus attention on outdoor spaces, by reflecting the abundant foliage in the gardens and the jungle beyond.