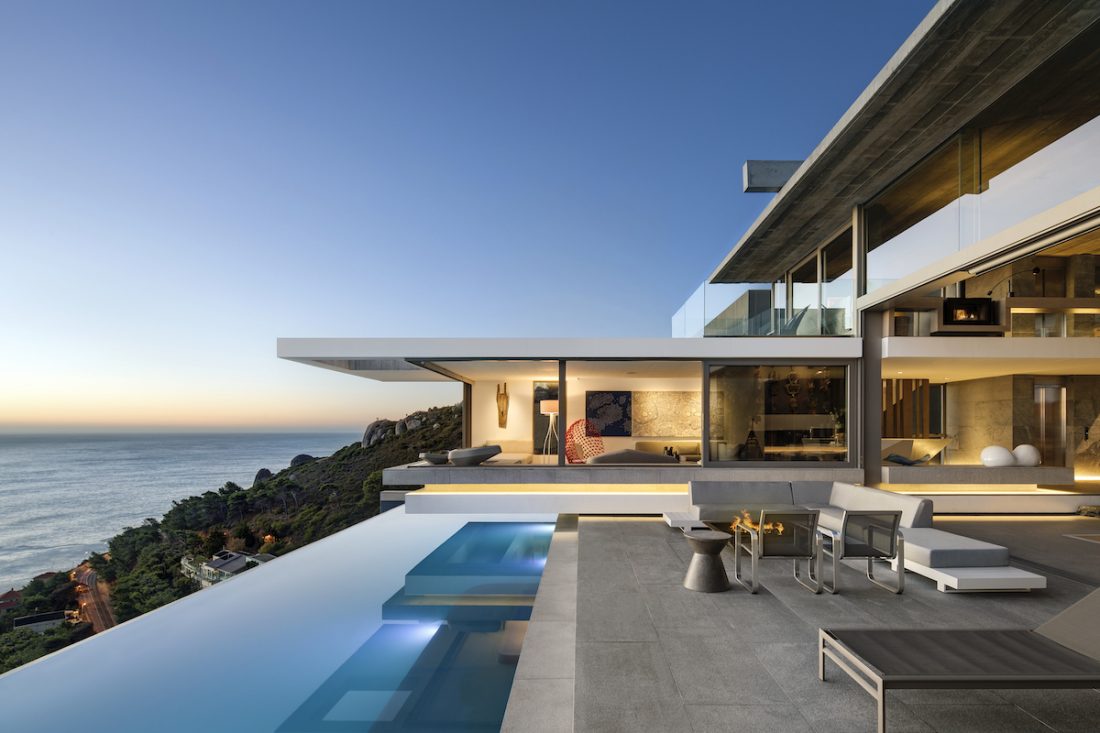 An ode to Table Mountain

Explored by Martin Jacobs, the pages of a new architectural monograph reveal a homegrown (and internationally lauded) studio’s fascination with, and appreciation of, Cape Town’s most famous landmark.

My earliest experience of a SAOTA-designed home dates to the mid-1990s. I was completing high school at the time and was considering architecture as a career. In part, inspired by the dramatic contours and contemporary interiors of SAOTA’s founding architect Stefan Antoni’s projects which I’d seen gracing the pages of House & Leisure magazine. I’d recently completed two school days work-shadowing various architects at Stefan Antoni Architects (SAOTA’s former name) as part of a careers-focused school initiative. My mother, at the time director of the AVA Gallery in Church Street – situated across the way from Stefan Antoni Architects – invited me to accompany her and my father to a cocktail party Stefan was hosting at a home he’d recently completed in Top Road, Fresnaye. Unlike today, there were very few houses so high up Signal Hill, and none that I recall so much in the shadow of Lion’s Head as this one. The climb by car from Arcadia Road to Top Road remains as intimidatingly steep now as it did then. I had never been into a home so contemporary in design, a home that was lit to impress and that floated above the Atlantic seaboard. It celebrated both the indoors and out and championed its uninterrupted panoramic views. Needless to say, teenage me was spellbound.

Jump forward to the mid twenty-tens, and as Creative Director of Condé Nast House&Garden magazine I was well acquainted with many of SAOTA’s homes, having worked on features published in the magazine of residences both local and international by the studio. So, it was with a sense of nostalgia and much excitement, that I recently paged through LIGHT SPACE LIFE, HOUSES BY SAOTA (Thames & Hudson), the acclaimed architectural studio’s first monograph. It’s a beautiful and incredibly visual book that deserves its rightful place on any coffee table, especially those that champion the proudly South African. Its pages explore a number of Cape Town homes, as well as others as far afield as Miami, Moscow and Ontario – offering not only insights into each project, but also contextual plans and material palettes. What follows are three extracts from the monograph that consider SAOTA’s work in relation to Table Mountain.

(1) There is something dramatic, epic and even mystical about Cape Town, the city in which we live and work. Table Mountain, the city’s most definitive feature, has a powerful presence that is as much spiritual as it is physical. It is a place maker; it has personality and presence. It is earthy and elemental, a dominant natural force that animates life in the city.

(2) If we did not know better we might think that the wind had carved the great mountains of the Cape – such is the power of its presence. But while there is a little truth to this, the opposite is more significant: the mountains carve the wind out. With the dominant, strong summer south-easter and the stormy winter north-wester, the Cape mountains add more drama by creating windward and leeward sides in reverse order of the seasons. This causes localized gale-force winds on the leeward side as the wind whips around and over the mountains to fill the vacuum, while areas just over the mountains on the windward side experience the same wind as a gentle breeze. At the Cape, the wind and the mountains are truly dramatic counterparts. On top of that, the winter storms can be ferocious, driving rain nearly horizontally under just about any overhang. Whatever climate change might bring, it is still the ‘Cape of Storms’.

(3) Table Mountain is largely made up of sandstone layers. In parts, some bands form shallow, broad caves from which the world can be surveyed, helping to make these places of both refuge and prospect, of safety but also openness. All this while the ferocious summer south-easter rages the tablecloth of clouds down on Table Mountain.

This is the elemental drama that truly defines the domestic architecture of SAOTA, an architecture that works incredibly hard to be as vital as the earth itself. While the firm builds more and more abroad, it is in and around the slopes of Table Mountain that the practice was born and has come to be masterly. It is on this dramatic terrain that the domestic architecture of SAOTA first continued the explorations of space and light initiated by Rex Martienssen through Le Corbusier – perhaps best seen in the earlier works of Stefan Antoni Architects, which held their own as beautifully sculpted, John Lautner-inspired curvilinear objects set upon the land, similar in some ways to Cape Dutch homesteads. Where earlier South African regionalist modernism used expanses of glass to capture light and views, with SAOTA the wall of glass disappears, and the space of life and living is held under an emphatic protecting roof. This dematerialization of boundaries and boxes not only allows a flow of space from mountain to sea – the passage of life temporarily held and stilled under the protecting roof – but also enables a set of unfolding platforms and spaces where the little and big dramas, joys and pleasures of life can be held with ease and generosity, an extraordinary stage set for life. This strategy of an emphatic roof – the sky rendered as a protective plane held up as if by magic while spaces accumulate underneath in apparently casual eddies – also opens the houses up to powerful diagonal vistas that shift perspectives and reveal deliberately layered spatial complexities, a sculpted space of terraces and platforms that is the inverse of the inward-focusing box-and-hearth of earlier times, a free-roaming ‘architectural promenade’.