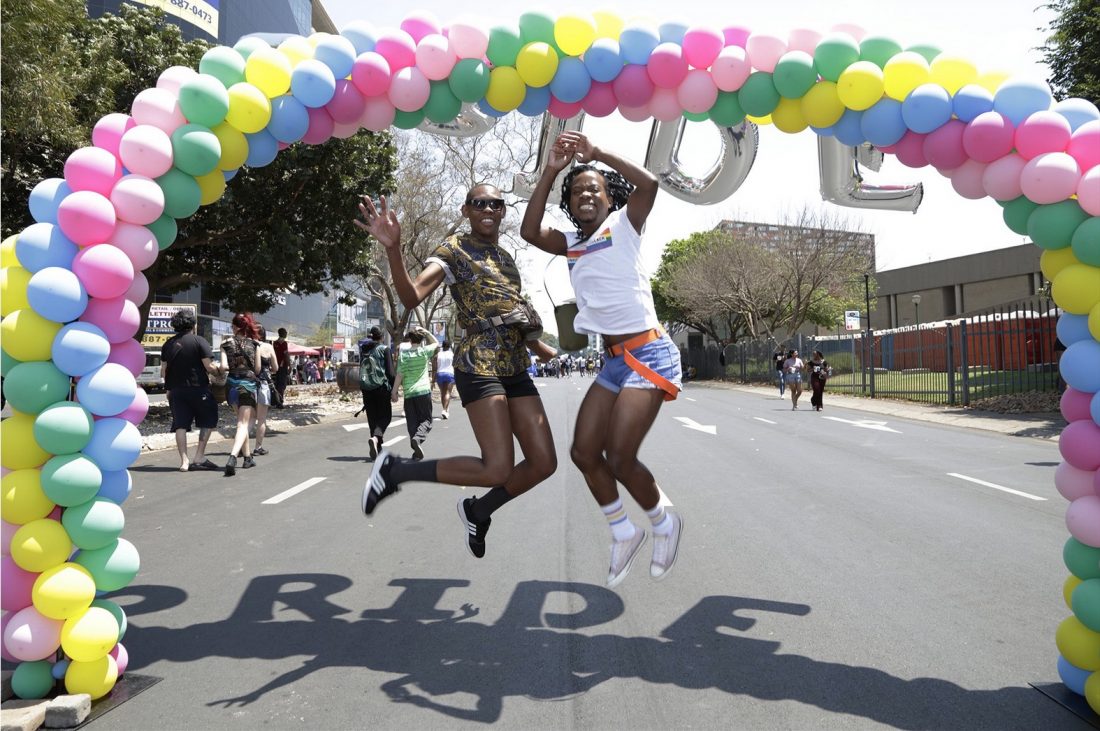 Sascha Polkey journeys beyond the rainbow flag and back to South Africa’s first Pride march.

On October 13, South Africa marked 31 years since the first Pride March in Johannesburg in 1990. Lockdown has scuppered the big Pride parades this year. Many of them have been virtual and the action has largely played out on social media, teetering dangerously close to slacktivism, merging into commercial and retail marketing as the colourful flag is claimed by mainstream culture. That we are living in times where tweens and teens are declaring their pronouns and seeing themselves as gender-fluid is exciting but in the blur of hashtags and merch are we missing the point?

In his preface to the book Pride, Protest and Celebration by Shaun de Waal and Anthony Manion, the co-founder of the 2009 Pride March, retired judge Edwin Cameron, recalls the context of the times in which Pride emerged, ‘Under apartheid, same-sexuality had been criminalised, pathologised and forced underground. But in February 1990, the government had announced a widespread climb-down from its previous intransigent positions. The commitment to constitutional negotiations for a non-racial democracy held heady promise, and we were determined to savour its benefits.  But there was still wide-ranging discrimination against gays and lesbians – which led some marchers to cover their heads with paper bags. The law made it a criminal offence for two consenting adult men to give expression to the most intimate and private of human longings, desires and emotions. Most formalised religions still decried homosexuality as a moral taint and a perversion.’

After centuries of ignorance, colonialisation and patriarchy, homophobia was deeply embedded into every corner of South African culture. In her 2019 open letter, queer activist and co-founder of the first Pride March in Johannesburg, Bev Ditsie, lays out the ostracisation of the times, ‘The accepted notion from our black families and communities was (and still is) that we are unAfrican and trying to adopt some mindless, pointless Western existence – or even worse, an existence whose intention is to destroy Africa and Africanism – a preposterous idea considering many of us love our traditions and cultures and are part of the fabric of this soil. We understood that Pride was a political act, an act of protest at these injustices as well as a celebration of our existence.’

That a small group of people saw the spark of freedom, the opening of a window of tolerance and ignited a movement was, in retrospect, a radical act. Edwin Cameron reflects, ‘Many within our community felt anxiously that our march was premature, that it would provoke adverse reactions, perhaps even a backlash, against gay and lesbian protections and advancement.  Those of us who were determined to proceed considered that all too often anxieties such as these played into majority prejudices and ignorance and – worse – reflected the ambivalent inner self-conceptions of the critics.’ Cameron recollects that the Chief Magistrate gave permission for the March late on the Friday afternoon, ‘I was waiting on standby to rush to the High Court (then the Supreme Court, local division) to seek an order setting the refusal aside.  Happily, the Chief Magistrate signed the order giving the March the go-ahead and we didn’t have to.’

Bev Ditsie tells more. ‘Braamfontein was our starting point. It also made sense to go through Hillbrow. This suburb signified freedom for the young white folk, for the queer folk, as well as a new kind of freedom for the black person as it was one of the first suburbs to allow black people access to both housing and entertainment. And yes, that’s also where the gay bars were found.’ Access and visibility were important to those who were emerging both sexually and racially from a long period of oppression.

A young black activist called Simon Nkoli, founder of GLOW, was also a co-founder and organiser of the march. His words confirm that the march was as much for freedom from racial discrimination as it was from inequality and sexual prejudice.

‘I’m fighting for the abolition of apartheid. And I fight for the right of freedom of sexual orientation. These are inextricably linked with each other. I cannot be free as a black man if I am not free as a gay man.’

It is this that is at the heart of Pride. As we mark Pride month and wave our flags let’s not take our freedom for granted. We are called to continue the fight for those who remain oppressed and persecuted in our own country and on the African Continent.

Speaking to Bev Ditsie on the phone, on the anniversary of the event, her mood is in contrast to the angry tone of her 2019 open letter, where she called out the dumbing down of the event into a party and parade. She says she feels we do have permission to celebrate. ‘Lockdown has forced us to go within and think, to be introspective and to think about what our inclusivity actually means. It was good for us to be forced to do this, the time was right.’ Ditsie says she is celebrating today because of the resilience in the everyday lives of gay people. ‘We are thriving! We have dinner parties, we work, we live, in this thriving community of people. That’s something to celebrate. Let’s celebrate being alive.’

Sascha is the owner of Rabbit in a Hat Communications in Cape Town.