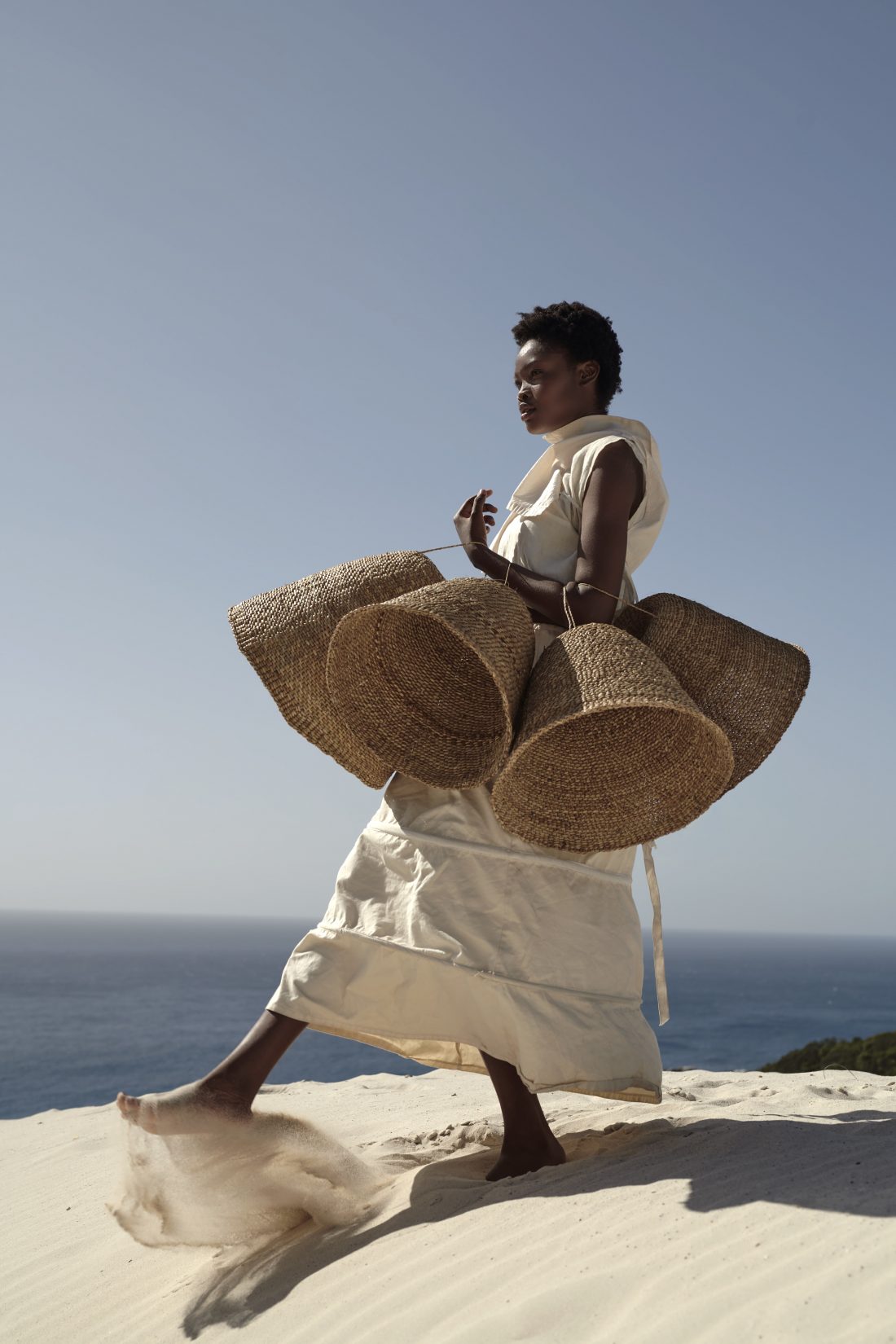 As Design Afrika celebrates its 25th anniversary, we listen as its founder tells of its evolution from a Botswanan backcountry search for rare baskets.

Design Afrika has become ground zero for authentic and beautifully crafted basketware sourced from the continent. In its early years though, Design Afrika was a resource for all manner of African treasures, only later streamlining into showcasing and developing baskets and their makers, bringing their wares into the interiors of craft-hungry South Africans.

Like a modern-day adventurer, its founder Binky Newman has travelled uncharted roads and met with tribes in remote parts of Africa to source and produce these woven treasures. “Botswana, Cote D’Ivoire and Burkina Faso were the first, then came Niger, Ethiopia, Tanzania, Madagascar, Malawi, Namibia, Eswatini, Lesotho and Djibouti. And then more…” recalls Binky.

The brand’s story is older than 25 years though, taking root in 1975 on a wild trip in search for rare Hambukushu and Bayei baskets. Like all tantalising beginnings, hers reads: “we were meant to spend a few days in the Okavango Delta and a few days in Maun…”

A vastly different world. No telephones and 800 kilometres of bad dirt roads. Life was laid back and hunters, game rangers and four-wheel-drive vehicles ruled the bars and roads. Most people had homes without windows or fences – crime was unknown. The biggest challenge was keeping the hippos from eating your front lawn.

And what did the journey there entail?

From the metropolis of Johannesburg to Maun was a long and arduous journey, which was always an adventure. The trip required crossing the Kgalagadi Desert and took five days on a very bumpy, dusty road, littered with potholes and always the odd wild animal crossing – not for the faint-hearted.

So how was the brand seeded?

My travels into the bush, meeting amazing traditional basket weavers in tucked away villages who had the ancient and pure craft of basketry in their blood inspired my creative spirit; I knew then that I wanted to showcase this dwindling craft in a new light. I felt that there was a place to reignite the love and passion for the weaving of grasses and fibre on a new and more design orientated platform.

After being invited into the homes of basket weavers in Botswana the word quickly spread through different communities and I was exposed to many designs and techniques throughout Central, West and Southern Africa.

What does the journey of an average African basket involve?

There is no one way of creating a new design. In the early days I drew in the sand for the weavers. This was easy, as changes could be made, and the weavers could contribute to the sand drawings. Now I use graph paper and/or a design program or a simple line drawing. I took a drawing course so that my sketches were decipherable!

Once, I was working with a group of Zulu weavers; a newly designed basket was being examined by us all and one of the weavers said “very nicenice” so that basket became known as the AmaNiceNice basket.

Tell us about some of your most exciting design developments.

One piece that comes to mind is the Garlic Gourd, now one of our signature pieces.

I was doing a design workshop in Zimbabwe, and I asked the Ndebele weavers with whom I’d been working if they could make a basket in the shape of a traditional clay pot. They became very distressed as the baskets came to take on irregular shapes and did not conform to the “known” shape they were hoping to achieve.

In my eyes it was absolutely perfect and had a spectacular organic and unusual dynamic. It took a lot of convincing to get them to continue with this “imperfect” basket. In the end, we learned that some people will see imperfections and others will see the genius of a piece and sometimes there are no mistakes.

What’s your most popular item then?

The Mistake Garlic Gourds! Woven from palm fibre and employing a twining technique, but with no specific shape in the mind. The shape is an organic development as described previously.

And your most unforgettable achievement as Design Afrika?

Receiving a repeat order from a shop in Japan; it’s a lovely endorsement of what we are trying to achieve. Also, being part of Joy from Africa to the World at the V&A Waterfront, a fantastic showcase of handmade craft in an international environment. I will never forget the delight I saw on the faces of the Dunoon weavers when I took them to see the Christmas decorations they had worked on for months.

How are you bringing modern appeal to an ancient African craft?

My collection is a combination of functional and decorative pieces. Baskets are no longer one of the souvenirs that an international traveller will pick up at a market. Weavers are now doing collaborations with furniture makers and exporting to Italy. They are highly prized by collectors, architects and designers. People are appreciating the skill and time that is needed to make a beautiful basket.

Some of your most memorable trips into Africa in the name of baskets.

Mozambique in 2004. I’d been asked to do a research trip in the Vilankulos district for an NGO. This involved tracking down basket weavers in the interior. It was two days before we met a young man walking down the road, weaving a hat. We jumped out of the vehicle and proceeded to question him. He told us that his mother was a basket weaver and he would take us to her. At that point, they didn’t sell their baskets but bartered them within the community. His mother was a master weaver and subsequently became the group co-ordinator for a successful basket business.

Another time I had to go to Djibouti to work with basket weavers who had never had any contact with designers or even entrepreneurs. We had to drive for many hours to find the weavers and used two different translators so that I could communicate with them.

And then the Burundian refugees in UN camps in Tanzania. It was a humbling experience to witness the bravery and highly developed skills of these weavers. I did a 10-day workshop in the camp and no design was too complex for them. It was so rewarding to later see their baskets being shown at international trade shows in Paris and New York.

Any exciting news on the horizon from Design Afrika?

When the world has once again righted itself, I plan to make a trip to Burkina Faso to spend time with the artisans there. We also plan to hold an exhibition at our showroom in Woodstock in the near future called Africa Explored – with a view to journeying through the discoveries that the explorers would have made.