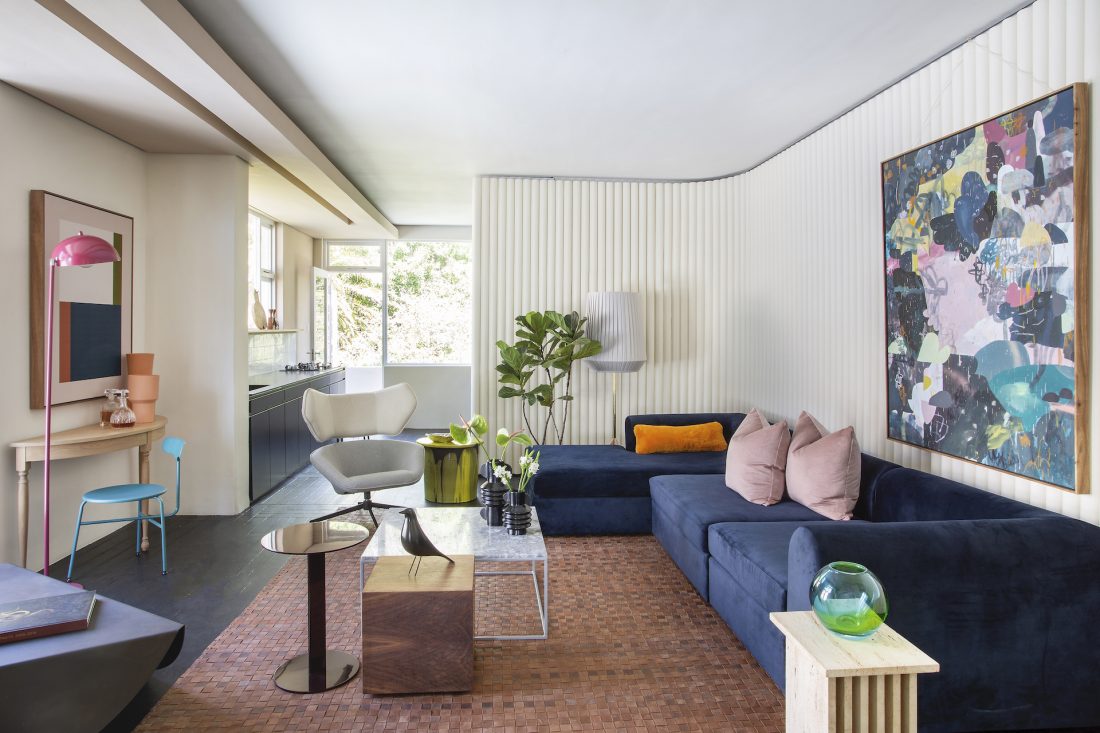 Round round, baby, round round…

The defining feature of this proudly local Cape Town apartment is its original use of curvilinear form. And its source might just surprise you.

It could be said that with the completion of fashion veteran Sara Colley’s Oranjezicht apartment – designed by Anlo Neethling of ONE Design and Development – the term ‘curvalicious’ became part of the design industry lexicon. The home’s curved and rounded forms, from its statement-making feature wall to its furniture, light fixtures and collectables, make for a seductive space. This is an interior whose consideration of original shape and punch-packing colour not only shouts clever renovation but also showcases standout pieces of South African design.

The makeover wasn’t originally intended this way. “When I began working on the project over two years ago, Sara and I conceived of a dark space comprising a palette of blacks and greys, and one that included marble and wood,” explains Anlo of the project’s backstory. With time, and a re-evaluation of the space, Anlo’s design for the makeover shifted from serious to something lighter and altogether quirkier. This, in part, was prompted by structural changes that Anlo and Sara chose to make. The apartment is one of a number in an old Oranjezicht building, its interiors originally characterised by separate kitchen, dining and living rooms and poky passageways.

Wanting something entirely more suited to the way we live today, the creative duo opted to raze three walls – those between the living room and entrance hall, passageway and kitchen. This then meant that doors to some of the other rooms led directly off the living room, rather than the former passageway. “We wanted to hide the three doors leading from the living room to the rest of the home, and wanted a wall solution, other than timber cladding or wallpaper, which felt unique,” says Anlo. “I decided on 80mm PVC downpipes, cut in half. These were attached to a cleat system and fitted to the living room wall.” The three doors, also clad in halved downpipes, were hung to align with the feature wall cladding.

It was the dramatic transformation these rounded forms brought to the space that inspired the curvilinear motif visible throughout the apartment. Anlo elaborates: “Taking inspiration from the feature wall, I sourced and custom-designed furniture with round or half-round detailing. In the living room, it’s noticeable on the armrest of the Maude modular sofa, the berry-coloured Dome floor lamp and the mustard Haas sidetable (all from Frederick Sinclair). In the dining room it’s immediately apparent in the circular dining table with rounded leg detail and in the curved dining chairs.” In the bathroom, Anlo’s choice of freestanding bath, basin, mirror and pendant light reinforce the theme.

Encouraged by Anlo, Sara selected a number of statement-making pieces by local designers for inclusion throughout her home. These include a steel Samoosa table by Xandre Kriel and Vondel side table by Kevin Frankental in the living room, and a Half Moon side table and riempie stool by James Mudge in the kitchen. “I always try and source as much as possible from local designers, even if it’s only a piece per room. We have amazing local designers with amazing product,” Anlo explains.

The same can be said of the artworks chosen to grace the walls of Sara’s space. Colourful and largely abstract, they include paintings by Paul Senyol and Gabi Lee, an etching in the bathroom by Johannesburg-based Bevan de Wet, and three prints from Lemon’s Dissolution collection. The rectilinear forms of these prints, like those of the Vondel side table, offer a counterpoint to the rounded forms. Their colours, a combination of primary, pastel and dirty shades, harmonise with key pieces throughout the apartment, including a pale blue chair in the entertainment space and a fiery brick-toned armchair in the bedroom.

There’s an instantly apparent sense of cohesion to Anlo’s renovation, one that’s made all the more apparent through repetitions in form and colour. Seemingly disparate decor elements – a suspended leather headboard, a rug depicting an oversized pelican, a carved stone head – all of which appear to speak very different languages, unite to tell a story of the power of South African design.