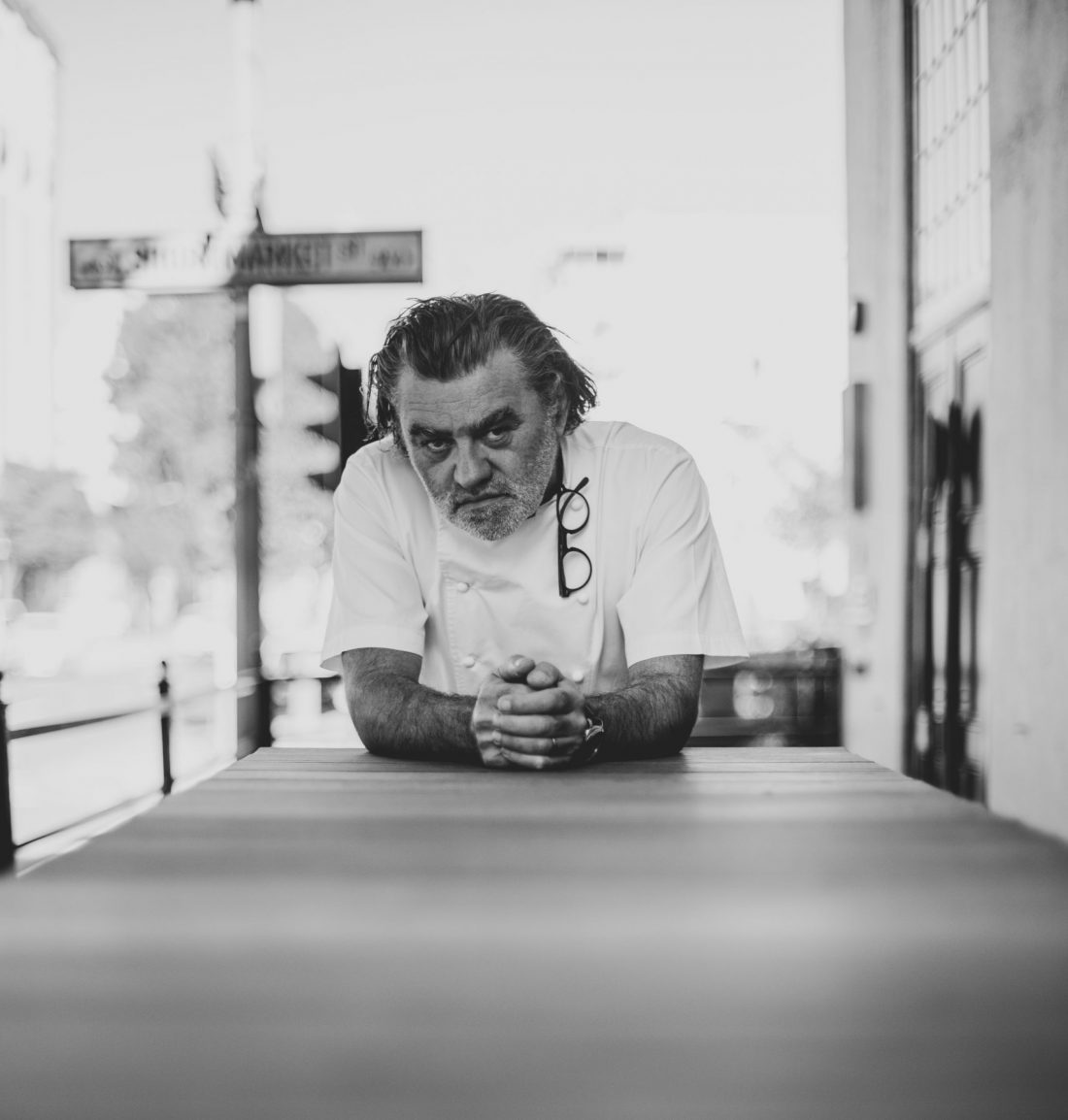 He’s a man inspired by the world’s cuisine, having run Sydney’s 2001 restaurant of the year (Banc), after training on the job in Switzerland under chef Bruno Enderlich (where “the penny dropped” for Liam), then later working in restaurants in London, Amsterdam, Italy and Spain, before moving to our own shores with his wife and business partner, Jan, and starting what would become a multi-venue restaurant group, Chefs Warehouse. Also to the Liam Tomlin name are Cape Town’s Indian tapas restaurant Thali and a tapas restaurant in Barcelona called Brugarol, a collaboration with urban conservationist Victoria Engelhorn and South African-born chef Angelo Scirocco. A second restaurant in Barcelona is also in the pipeline. To add to that, he works with Singita game lodges all around Africa on their menus. Quite a list.

I’m curious how it’s possible to retain the high standard of quality that he does with fingers in so many pies, so to speak. In a conversation with Liam at Local over a few glasses of wine, he drops just enough breadcrumbs that it starts to make sense.

What led to Liam’s departure from Australia, after one planned year there turned into 15, can perhaps most succinctly be summarised as being trapped by their own success. Being named the number-one restaurant in Sydney came with its own expectations and massive pressure and Liam no longer felt free to run it the way he wanted to.

And so the move to South Africa was an opportunity to do things differently, in what Liam perceived to be a relatively untapped, and less regulated market. He wanted the freedom to change the menu daily if he wished, to traverse different cuisines (Japanese, Italian…); to do away with “formal, stuffy service” and to take an approach that prioritised their lifestyle, for him and wife Jan and their staff.

“This is also a much nicer place to live,” he adds.

Last year the flagship in Bree Street and original Chefs Warehouse rebranded as Chefs Warehouse Winebar & Pinchos – pinchos (or pintxos) being snacks traditionally served in Spanish bars. While the new menu is Spanish in essence, it is pinchos in sentiment  –  with menu favourites like the deliciously indulgent whole tuna belly and the costilla de ternera (rib eye) each making a generous main for two. But it is the sentiment that counts: it’s about simple dishes that allow the star ingredient to shine (the fish; the steak; the chorizo), with little fuss, maximum flavour, no white table cloths and certainly no reservations. Also, as per Liam’s team-oriented work ethic, they are closed Sundays and all public holidays.

You’ve got two choices, says Liam. Take it, or leave it.

Each Chefs Warehouse restaurant has its own flavour of the same original concept and philosophy: fancy tapas, to put it colloquially, and a seasonal set menu. The group to date includes Bree in the Cape Town CBD (Pinchos), Beau Constantia and Maison in Franschhoek (both on wine estates), and the newest (with a view), Tintswalo, located in a boutique hotel on one of the world’s most scenic routes, Chapman’s Peak Drive.

Each one is a business partnered with a chef who runs the kitchen and menu relatively independently once they’ve proved their chops. The first expansion was Beau Constantia, with Chef Ivor Jones, also co-owner.

A Middle Eastern affair inspired by that region’s cuisine and eating style, think tapas for two that speak to the land and the sea with sultry, smoky flavours, spicy aromatics and a handful of ingredients you’ve never heard of. Whatever you’re imagining, it’s at least twice as good. Sitting in the rafters looking into a small open kitchen on one end and wine bar below, the sounds of live music wafting up amidst a buzz of voices and plates of sumptuous and exotic fare flying past, there’s an energy that’s almost vibrating. The interior colour palette of iridescent yellow, gold and red accenting 200-year-old face brick and warm wooden furnishing definitely contributes.

Try the oysters (with tiger’s milk and pomegranate jewels), the mussels (served cold in a citrusy tea), the smoked cauliflower (rubbed in spices that magically taste like chicken done on the braai), the crisp sumac onion and fennel salad, and the lamb tagine that you can cut with a spoon, and you won’t be disappointed. We’ll have to go back again for the whole roasted fish.

There’s a lot else going on in Local. The double-storey, multi-venue, interconnected space of food and wine vendors (all owned by Liam and Jan) also includes a downstairs restaurant area with Japanese Yakitori bar and an Italian, La Cantina, where you can order off either menu; there’s the wine bar, Penny Noir, run by young sommelier Penelope Setti (who curated our Summer wine selection in the midst of her December opening); and market-style retail spaces with farm flowers, a deli that stocks ingredients you’ll find on Liam’s menus alongside fresh produce, and a colourful library of cookery books sorted by geography.

“The one thing we learnt from lockdown is that local is key,” says Liam. Those restaurants that never catered for a local market, who built a business on selling to tourists, have come undone. And if you go into Local you’ll find that  –  everything in the shop is locally sourced, except the cookbooks. And the same goes for the furniture  –  “wherever possible we support local,” he says. Another key for Liam with Local is creating a space that’s more affordable than the set menus of Cape Town’s fine dining offering (Chefs Warehouse included), as he’s cognisant of the current economic environment.

After dinner at Mazza (on a second visit, a few weeks after meeting Liam) we sit at the wine bar with Penny and get to meet chef Geoffrey Abrahams after he closes service around 10.30pm. He doesn’t know he’s being interviewed. I ask him what it’s like to work with Liam and you can tell he’s genuinely a fan.

“He’s all about giving opportunities to people who he can see have the same vision to grow the company and grow the space we’ve been given,” he says. “Once you find your feet he completely backs off.”

This joins the dots for me to our earlier discussion, where Liam is the first to admit, “The young chefs we’ve got now running our kitchens, they’re better chefs than me, for sure.”

They’ve all come through the ranks of Chefs Warehouse in one form or the other, whether trained by Liam or chef partner Ivor or in one of their other restaurants. They very rarely hire from outside the group.

It’s all about people, says Liam. The most important ingredient of our business is staff.

It also ties into an interesting story in the Sydney Morning Herald, published 15 years ago, which talks about the incredible success of Banc that was followed by an equally spectacular implosion. But the point of the story was how, regardless of its ending, every single chef who worked under Liam went on to head highly respected restaurants all around Australia and in London.

Liam talks about his chefs now and says they’re like sons. “They spend more time with me than their families. They come to me for advice. It’s a huge privilege.”

As a fifteen-year-old Liam was expelled from school and got a job washing pots in Dublin, and that’s where it all started. His family are all still there.

“I love Ireland,” he says, and he still visits often. “But I grew up in the generation where we all wanted to get the fuck out of Ireland and nobody ever went back. My mother’s been living in the same house for 61 years. It’s on a cul de sac and on the day she moved in every one of our neighbours moved in on the same day. And they all banged out kids around the same time. I was the youngest and I had 20 mates on that street.”

Has Liam inadvertently been trying to recreate that? “No,” he says. “Well, maybe.”

“When I first went to London it was really lonely. And a lot of our staff come from a very similar sort of thing, and so a lot of what we’re doing here is trying to look out for them and protect them.”

Liam and Jan have never had children. But one gets the sense that they’ve created an enormous family.