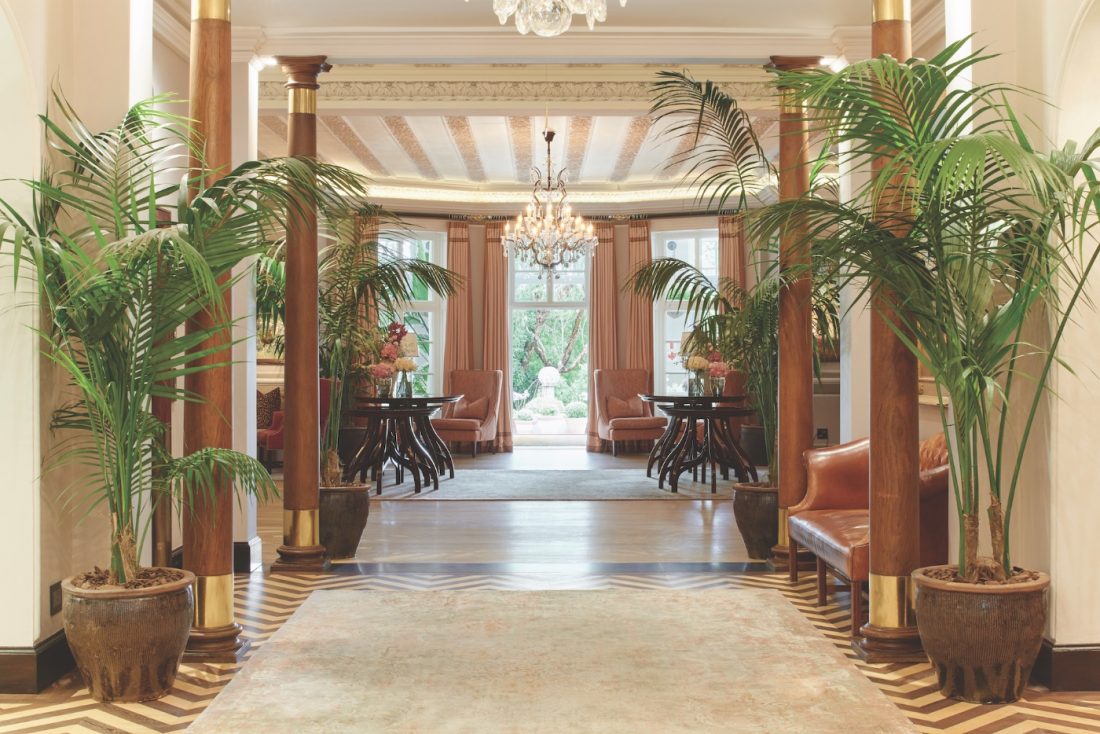 Through the Mount Nelson’s revolving door…

The iconic Mount Nelson hotel in Cape Town has been open for nearly 45 000 days. Jonathan Bain stayed there recently for just three of them.

It’s clear that the Belmond Mount Nelson hotel has an ace PR team. On the internet, the talking points are resolutely uniform. By the time I got to the article on ‘Five Things You Didn’t Know About The Mount Nelson’, I of course already knew them all. Pink! High tea!

I am unashamedly a fan of this hotel. But in researching this article, I was struck by how candy-floss the write-ups felt after a while. Ephemera. So, as I checked in for an anniversary celebration, I determined to look beyond the brochureware – pinkhightea – and consider why this behemoth of a building, that straddles nine acres and three centuries, remains so thoroughly appealing.

The first reason, of course, has to do with its very longevity. Opened in 1899, it has watched the comings and goings of empire, war, and the old and new South Africas. The current queen of the United Kingdom celebrated her 21st birthday there; Winnie Madikizela-Mandela, her 80th. Upstarts like the One & Only can’t compete with this kind of heritage, private islands and Nobu notwithstanding.

But the more important reason, not unrelated to the first, is that the Mount Nelson is unselfconscious. It does not try to compete with the newbies, and it wears its history well. The past century (and a bit) is fully present – there’s a reassuring creak in the floorboard of my room – and not tidied away. Its pinkness is, indeed, the obvious example.

The exterior has been painted that colour since 1918: a novelty once, but now simply part of what contains the furniture. (Prior to that, the hues were evidently yellow and green, then ochre and oxblood.) The hotel is thus – even as a luxurious, European-styled old pile ensconced at the very bottom of a free Africa – authentic. That is why the Dalai Lama can visit – the beleaguered monk in his modest robes – and host a session on the Four Noble Truths in a five-star ballroom. Never mind the Buddhist chants, it is the hotel that is transcendent.

You can see that in the list of previous guests; those who are often mentioned, as well as those who are not. Marlene Dietrich stayed. Winston Churchill wrote there as a young war correspondent. Nelson Mandela posed for a portrait in the garden. John Lennon signed in under the name of ‘Mr. Greenwood’. . I’ve personally spotted John Cleese peering into the gift shop windows. Bill Clinton was supposed to visit, but his oafish secret service demanded that the palm trees be removed from the entrance avenue for security reasons. The hotel management obviously declined, and Mr. Clinton sought accommodation elsewhere (no doubt to the relief of the Mount Nelson’s female staff).

Who is obviously absented from this vaunted public roster, though? PW Botha, for starters, who certainly hosted the prime minister of Taiwan there for a lunch in 1980. BJ Vorster apparently. Prince Andrew. And perhaps also Blade Nzimande, the secretary-general of the South African Communist Party no less, who, in 2010, decamped to the Mount Nelson for a fairly long stretch at taxpayer’s expense. These chaps are kept well out of the online travelogues, and that is a pity.

Because I think part of the point of the Mount Nelson is that, although it has seen it all, it has been as a detached observer. The famous and the faded. The Brits, the Boers, and the democratically elected. Those in stuffed corsets, and those who let it all hang out. The young bride and groom, with their wedding-night nerves; the celebrities, with their more storied sexual predilections. The scoundrels. The seriously-minded. The millionaires and the mountebanks. They have all trod the herringbone entrance hall, and rested wearied – perhaps troubled – heads on soft white pillows. This is an unironic place; the Mount Nelson does not judge. (Unless, of course, you are poor.)

Perhaps, then, the candy-floss reviews are oddly appropriate after all. The Mount Nelson is a very long story – a repeating history – without a central message. It does not ‘stand for’ anything; instead it is a space on which to project your fantasies. American Instagrammers dress in pink and pretend to be happy. PW Botha thought he could hold off die kommuniste via a cream-bun alliance with Taiwan. Lennon sought enlightenment there; the 14th Dalai Lama claimed to have it. Nzimande imagined that his inherent contradictions could be drowned in champagne. (He was wrong, of course, but what a place to be wrong.)

My weekend at the Mount Nelson – I’ve visited many times before, but never stayed – was sublime. I miss the Windsor table buffet-style spread at high tea, where you could elect to focus exclusively on – say – the profiteroles all day. But the coffee has improved, so these things tend to balance out. Our duck-egg-blue suite was broad and light.

The discrete, heated ‘second’ swimming pool was quite perfect. The staff were wonderfully human. And the whole machine felt effortless. My projected fantasy? That I was wealthy enough to stay for as long as I pleased. Indeed, in my readings, of all the names of all the guests I saw, one stood out: Mrs. Theresa Cohen. She appears to have been the Mount Nelson’s longest-staying resident, and roomed there from 1952 to 1986. I am deeply envious.

Images: Supplied and as credited.

DRINKS OR PLANTS?⁠ ⁠ We have a bit of a crush

IT’S ABOUT THE DESTINATION ⁠ ⁠ Are you looki

NO PAPER AEROPLANE...⁠ ⁠ We recently met up wi

THIS BEACH HOUSE IS RIPPIN'! 🏄🏻‍♀️⁠