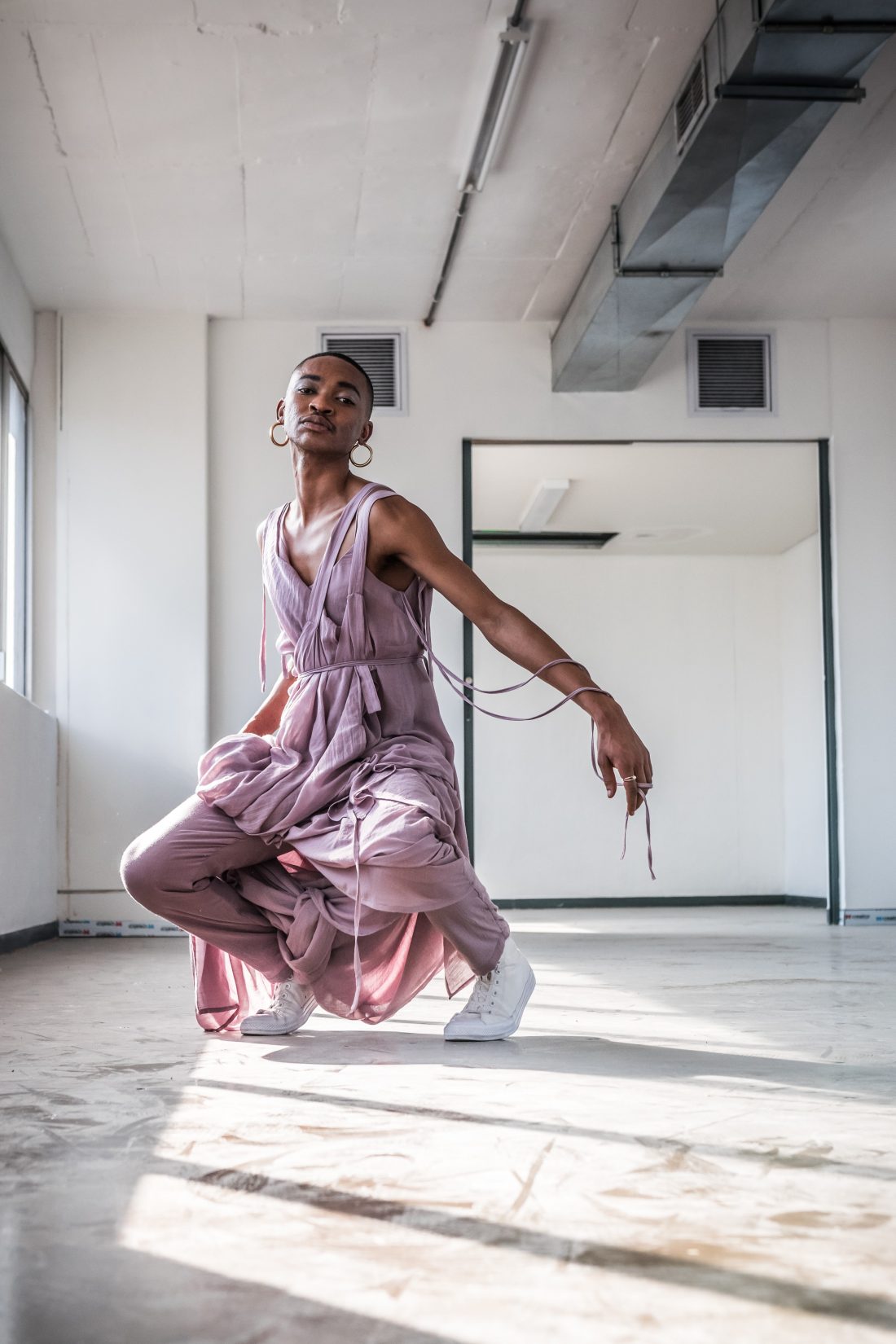 And we drop in to chat about their sonic shift, wardrobe choices and future musings.

Watching Mx Blouse’s Sandiso Ngubane perform is like nothing you’ve ever experienced before; it’s like a slap in the face… in the best possible way. They command the room and hold the audience’s attention with a mix of boundary-blurring haute couture, sassy moves and beats that your body can’t help but groove to. From boom bap and deep house to kwaito, their neo sound and non-binary identity shatters stereotypes and their brand-new album, Elementality, bores into the vulnerability of doing just that.

Mx Blouse has been teasing us with the release of singles off their debut full-length album since May, but Elementality finally dropped on 24 July. We caught up with the fashion blogger and former consumer trends analyst turned rule-breaking musician behind Mx Blouse.

Your songs are as genre defiant as you are gender defiant, where does your musical influence come from?

I listen to a wide range of genres and I always have. From dance music to hip-hop, house, R&B, jazz and kwaito, nothing is off limits for me, and I try to combine those sounds to create something unique. While people have generally described my sound as neo-kwaito, I personally don’t like defining it. It’s dance music with a strong kwaito influence, but I don’t think it can be limited to one specific genre.

If Elementality was a woman, how would you describe her?

She’s got lots of charm. She’s in love, but she’s afraid of getting hurt again, so instead of committing to something, she prefers flirting and having lots of fun.

How does the new album differentiate itself from your other tracks sonically?

This is a dance music album. Previously I’ve tried to prioritise the kwaito elements, but this time I just wanted to make music one can dance to; because I love house music so much, it leans towards that.

So, what’s shaking up Mx Blouse’s wardrobe at the moment?

Not much, really. I recently had an obsession with jumpsuits and big jackets, but Covid-19 means I haven’t been able to wear any of that, which kinda sucks.

How would you describe your personal style?

It’s hard to pin down. The closest possible description is probably ‘androgynous’; though on some days I feel more feminine than others and sometimes more masculine. I could be a pantsula sometimes, or you could find me pairing a dress with skinny jeans or tights. So, I guess ‘minimal and eclectic’ then?

If we read between the lines of your latest songs, what would we find?

I’ve come to accept that I’m not somebody who is loud about achievements. But I’d say I’m grateful to be a queer person working in this industry. Queer artists are very often ignored, yet I’ve played at some of the biggest festivals in the country, toured in Europe and featured on magazine covers. Not a lot of people who present the way that I do are afforded those opportunities. It’s an absolute privilege.

Once you’ve completed an album as an independent artist, there’s a lot of admin that’s required of you, so a lot of my time is consumed by that now. I’m honestly also consumed a lot by worry and sadness over this pandemic.

What do you hope the future holds for Mx Blouse? And for Sandiso?

For now, I just want my music to reach more ears. I started doing some theatre work late last year. I had no idea I’d find myself acting, never mind having the skill for it, but the feedback was so good and it was fun. I’m also currently finishing a creative writing course with the view of writing short stories and maybe a novel.

What did you wear to your last gig?

I wore an orange jumpsuit that I spotted in a shop window while I was on tour in Zurich, Switzerland. It was so expensive, so I tried ignoring it. But I passed the store every day on my way to rehearsal and eventually gave in. Lol!

Was there a big break in your career, or was it a slow reveal?

I think my big break is yet to come, but I prefer it that way. I’m not obsessed with the idea of being an overnight star. I’ve been learning a lot with every new level I reach in my journey. I’m still learning and investing in my career and I’m happy to be doing it on my own terms.

How has your personal journey with your identity impacted your work as an artist?

There’s so much pressure on openly queer artists to always talk about our identity. I think the work suffers because the attention is removed from it. This year alone I’ve declined so many interviews, because they were only interested in my gender identity. I understand that people want to gain a greater understanding of who we are, considering that we’ve been invisible in the mainstream for so long; but it’s also exhausting. I don’t always want to play the role of accidental activist. It’s a lot of pressure.