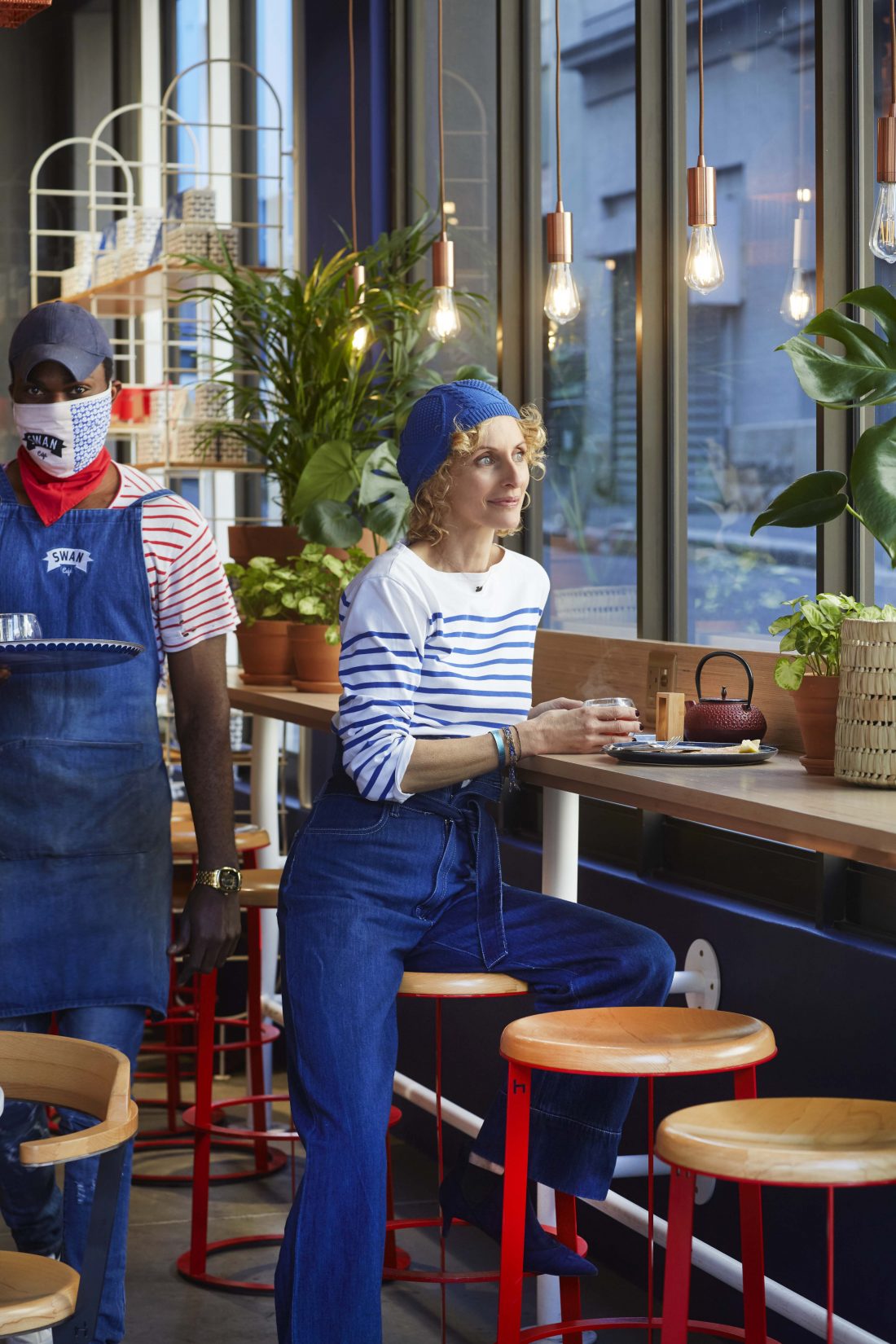 For the Swan Café owner, work ethic, intuition, attention to detail and caring for people are integral to winning as a woman in business.

Swan Café is a Parisian-style crêperie located in the heart of Cape Town, the beautiful brainchild of Jessica Rushmere – former international model, personal fashion and style consultant and the first owner of another successful café-meets-bakery in De Waterkant, La Petite Tarte. Lanky, elegant and stylish (in the way that only the French can pull off), Jessica is the embodiment of the swan.

Driven by the love of her home nation, a desire to share her culture, a strong sense of style and aesthetic and a steadfast trust in her intuition, Swan is the culmination of a years-long vision and obsession of Jessica’s. For her, passion and detail are what matter most.

“Every detail was important, she tells us, “but I also had to be on top of every detail. I’m a pain in the bum actually!”

It was fundamental for her that everything be locally sourced. When it came to the food menu, she insisted on seasonal and she works hard to bring on board only high quality, ethical and artisanal suppliers – from her coffee, which comes from Kalk Bay micro-roaster Damn Fine Coffee, and speciality tea, which is blended exclusively for Swan in collaboration with Nigiro Tea Merchants, to sourcing all fresh ingredients from local farmers.

“As an ex-model (and an ex-bakery owner), hospitality is my thing. It’s always about people,” she says. “At the beginning it was all ‘Bonjour! Bonjour!’ And you’re wrestling with questions like ‘is anybody going to like buckwheat?’”

Jessica is a great believer in empowering the people you employ. With Swan, she wanted to offer something different. She wanted to create an experience. And developing the team was part of ensuring that this could happen.

“One thing I’ve learnt is, don’t do everything yourself but rather learn to curate a team.”

And so, she brought together an inimitable group of individuals to help build the Swan brand. Heidi Chisholm (South African graphic designer based in New York) created the brand identity. Carey Erasmus (@bitsofcarey) consulted on food and designed many of the dishes on the menu today inspired by traditional French crêpes and Breton galettes. Haldane Martin, as the interior designer, brought the brand identity to life with custom furniture pieces and lighting designed for Swan – and the space has since graced the pages of almost every decor and design magazine in South Africa, as well as being named in Wallpaper* magazine’s ‘World’s Best Coffee Shops for Design Lovers’.

Where does she get the magic touch? “It comes from wanting it really badly,” she says.

Jessica grew up on a farm in the east of France and moved to Paris when she was 17. Following a modelling contract in Cape Town in 1995, she married a South African in France in 1999 and they decided to make Cape Town home. She now lives in Sea Point with her daughter, Lili (whose favourite French crêpe on Swan’s menu is named after her: Lili la Gourmande, below) and older son, Luc (look out for Luscious Luc on the menu).

“It’s a challenge being a woman in business and also a foreigner in Cape Town,” Jessica admits. “Intuition is an asset – it helps you go in the right direction. But you need to trust that first instinct. As women, we have a strong instinct and sense of intuition.”

When you have the instinct to do something, go for it. Put everything into it and be ready to fail. Being scared takes you nowhere.

You also have to trust the process, she shares. “You won’t always love the process – you actually hate it sometimes – but you must trust the process. You have to go through everything yourself to reach the final destination.”

As a mother, she also firmly believes in leading by example.

“In Cape Town we’re spoilt with domestic help and nannies,” she says, “but it’s important to introduce children to a strong work ethic early on. We can give them anything, but a work ethic is something we must lead by example with. My children must see me working.”

Success for Jessica is being content with what you do. Recognition is both important and not important at the same time. “With Swan I knew it would work but I was ready to fail.”

Since opening its doors on Buitenkant Street in May 2018, in the thriving creative hub of Cape Town’s East City Precinct – an area known for its indie art galleries, hipster coffee shops and bars as well as the District Six Museum, a cultural icon of the Mother City – Swan Café has become a local and tourist favourite amongst a host of concept eateries that popped up in the burgeoning area over the last few years. But the COVID-19 pandemic and national lockdown have not been kind to many South African businesses, and the hospitality and tourism sectors have been hit some of the hardest. Millions of jobs have been lost and many have had to close their doors; it’s been a sad state of affairs and Cape Town in particular has lost some of its most-loved institutions.

Those who’ve survived the storm have done so through a combination of good fortune (empathetic landlords offering rental reprieve), determination and constant innovation. On a sometimes-weekly basis since March, national industry regulations were changing – one minute there were no takeaways or “non-essential” deliveries allowed (including cooked food), the next they were but with strict hygiene protocols, staff limitations and restricted hours; then alcohol was taken back off the agenda but sit-down eating was fine (with social distancing, of course, so reduced capacity). At the time of writing, the “prohibition” has lifted and establishments have rushed to get their alcohol deliveries in amidst nationwide bottlenecks – never mind waiting for beer taps to be serviced before the first draft can be poured. Then there was that time a peaceful protest by the tourism industry in a march from Parliament (all in masks and with social distancing adhered to) led to high-pressure water cannons blasting Swan customers innocently sipping beverages at tables on the sidewalk. It’s been a veritable quagmire and the end a faint light just visible as the cloud has begun to lift.

For Swan Café, the pandemic meant swiftly setting up online orders then a new online shop to sell Swan merchandise, pantry goodies, their famous crêpe cake and DIY Swan Kits, allowing customers to recreate the French crêperie experience at home. Jessica added a Swan-print facemask to their merchandise range. Deliveries of hot food and coffee around Cape Town became the norm as businesses started reopening. And when table service resumed, Jessica brought in green foliage from local nursery Plantify, to create natural boundaries between groups, while also supporting another local business (the plants are for sale). She’s also implemented a QR code menu, which allows customers to browse from their own phone. A welcome addition to their menu, hot pastries made fresh every morning, to accommodate the shift to takeaway coffee, have since become a huge hit.

Above all, Jessica has worked hard to keep being able to support her team through this difficult time, keeping them both safe and employed. She endeavoured to pay salaries with any proceeds made from online orders while their doors were closed, and she and her manager and chef, Jon Evans, put in extra hours to keep the business afloat.

State of disaster aside, Jessica has always believed in staying positive as a way to uplift the people around her, and she understands the value of bringing out the best in people. “As women, we naturally are very encouraging – we’re mothers, nurturers,” she says.

“Be open to the world and its people,” has been her philosophy.

Learn from experience and be awake in the world.

Maybe more of a survival strategy than she realised!