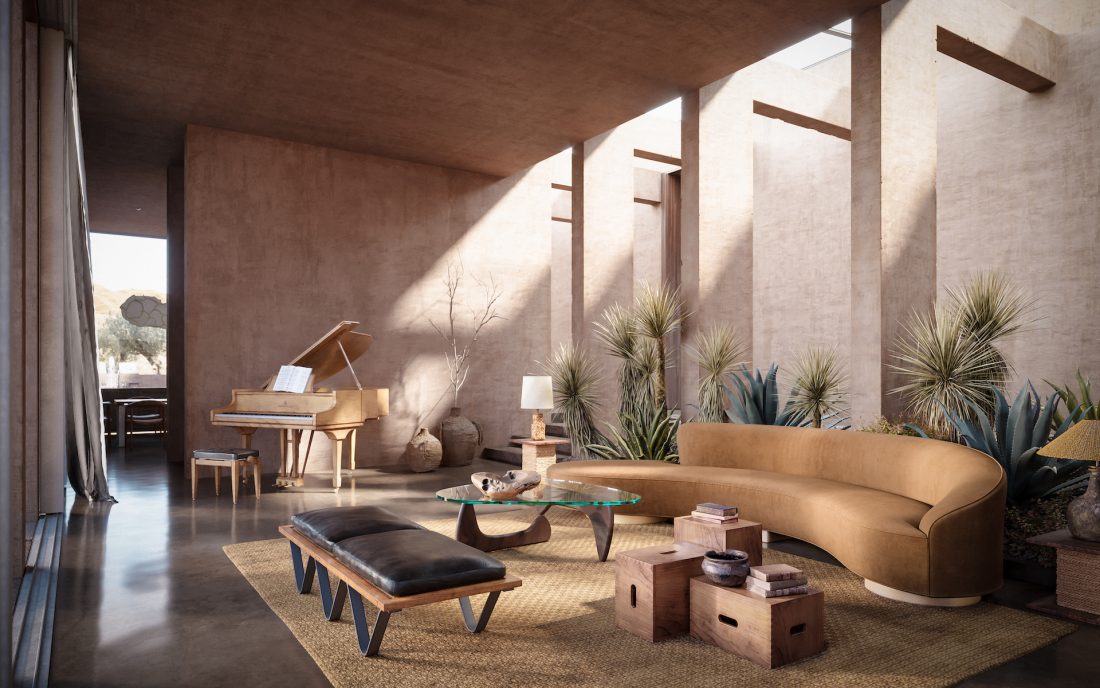 Having mastered the art of indie rock, heartthrob drummer-turned-architect Carl Gerges has focused his attention on conquering ancient stone. We asked him about the cultural and historical significance of his architectural eye candy.

When asked who Carl Gerges is, those in the know will tell you he’s the drummer for Mashrou’ Leila, one of the Middle East’s biggest indie rock bands. Few know that less than a year ago he launched his own architectural studio in Beirut, his hometown.

But word of his additional creative talents spread quickly when he and his newly renovated apartment graced the April 2020 cover of Architectural Digest Middle East. This, and the attention two standout projects (Villa Nadia and Villa Chams) of his have received, has firmly placed Carl on the design map as one to watch.

My impulse has always been one of creation, regardless of the medium. Mashrou’ Leila was formed in 2008 and was only intended to last a night; this is where the band’s name later came from (mashrou leila in Arabic means one night’s project). We were all architects and designers with a shared design language and the same approach to music. During the founding years of the band, I received my BFA from the American University of Beirut. I hope the launch of my architecture studio will allow me to express and reinvent myself, while striving to impact people’s lives in a sensual, practical and emotional way.

It’s quite natural for me to switch between music and architecture as the two fields overlap in my daily life. I often use my architectural skills with the band to work on stage design and art direction. Touring with the band broadens my horizons and helps me better understand interpersonal communication. I’m always inspired one way or another – when I feel that my music writing becomes stagnant, shifting back to architecture re-inspires me. Based on rhythm, proportion and harmony, architecture and music share a clear cultural lineage that many architects and composers have experimented with. In my projects I try to explore this code that ties the fields together – Villa Chams is heavily inspired by it. In addition to being rhythmic and sequential (therefore compositional), its main facade satisfies a musical principle: sporadically equidistant walls and columns orchestrate a rhythmic flow on a rudimentary grid, creating both introverted spaces and open extensions.

2020 presented me with the greatest set of challenges I’ve faced. It taught me a number of valuable life lessons. We take many things for granted and overlook the valuable importance of living in a healthy manner, surrounded with spaces filled by happy serenity, beautiful materials and convenient objects. The pandemic and multiple lockdowns reminded me of the importance of having a well-equipped, serene home, and it brought me closer to nature. The devaluation of Lebanon’s currency made the nation realize that we did not develop the market for locally available resources and raw materials, and instead mostly relied on imported construction materials that have become largely unaffordable. And finally, the massive explosion that destroyed half of Beirut was a traumatizing experience. It has obliged us as a city to quickly find new methods of construction and renovation. These must be more efficient and affordable than the international construction methods that we previously implemented without proper consideration for context and tradition.

My home is a shelter that protects me from the world’s noise and pollution. Here I can take a step back, disconnect, cook, listen to music and relax, because when I’m touring with the band, people constantly surround me. Living in a perpetual state of such overwhelming hysteria can easily become unhealthy. The apartment is located on the top floor of a 1930s Art-Deco building. Once owned by a family who fled Lebanon during the civil war, the apartment had been abandoned for more than thirty years. It was dilapidated when I bought it; there were neither windows nor doors, the walls were shattered with shrapnel and it would rain inside.

The raw, natural materials I’ve used in the renovation speak of serenity and will age gracefully. It was challenging to integrate modern systems without affecting the original Art Deco architecture. Steel beams were used to reinforce the ceiling and to brace the external walls, and a false ceiling was used to conceal the air conditioning, cabling and central heating. The apartment is open plan and maximises sunlight, which pours in through the balcony garden with a greenish tint that blurs the lines between indoors and out.

Villa Nadia is a testament to Lebanese architectural history, and proudly reminiscent of a golden heritage. Built in the mid-1800s by a well-travelled businessman and collector, and having resiliently survived decades of destruction since, the plot comprised a large main house, staff quarters and garden. With its red tiled roof and its iconic triple-arched windows, the house’s main facade was typically Lebanese. Unfortunately, the third-generation family fled the region during the civil war, leaving the villa vulnerable to squatters. 45 years later, a descendant intent on restoring it to a family home purchased the ruins. I was tasked with renovating the existing structures and adding two extensions – a guesthouse and garden. It was important to me that the garden be an orchestra of scents like orange blossom, jasmine and citrus, as an ode to plants found in traditional Lebanese gardens.

The guesthouse is designed as a modern tree house right down to its colour palette of wood and greens. It is built with lightweight timber and steel joinery. Given that it’s set amongst pine treetops, it was critical that the structure didn’t overpower the original building or the surrounding trees.

I wanted my renovation to engage all the senses and trigger nostalgia. I decided that conceptually the restoration, as well as the techniques adopted, should embrace my desire to not only renovate the space physically, but also spiritually. Keeping this and precision in mind, I hired local artisans to restore the carpentry to its original state, using traditional techniques while integrating modern systems.

I wanted Villa Chams (sun in Arabic) to have a melodic element that would add further dimension to the harmony of the site. The villa is situated in Baalbek, a city not far from Beirut, and home to the Roman temples of Bacchus and Jupiter. Nature is at its most beautiful here, untouched for hundreds of years. In all their monumentality and glory, the adjacent Roman temples perfectly succeed in blending with the surrounding flora. It was fundamental that the villa achieves the same result.

I worked a lot with the natural resources available on site. I used earth that came from excavation works to cast the entire structure of the house. The walls are finished with poured earth concrete. Native pebbles and aggregates were used in the mixture of the terrazzo that paved all the outdoor terraces and the pool; the latter was designed to flow like a river past the villa’s columns. I even used existing rocks as walls, like in the bathrooms, where I deliberately avoided sound-absorbing materials, opting instead for hard surfaces that would amplify the sounds of flowing water.

Walking through the villa the outdoor landscape is always at eye level, so one automatically feels cocooned. The house follows the natural slope of the site; each room is on its own level and therefore has a different relationship to the outdoors. The sliding windows are floor to ceiling and help blur the lines between indoors and out.

I am a contextualist – my philosophy is always to work with what is available on site. Given the particular qualities of each site, the context and the brief, it is impossible to have the same creative process twice. But all of my projects consider and preserve their relative social, environmental and historical aspects. In so doing, they share the same philosophy. I regard every project as a love story, an adventure that can take one on so many different paths.