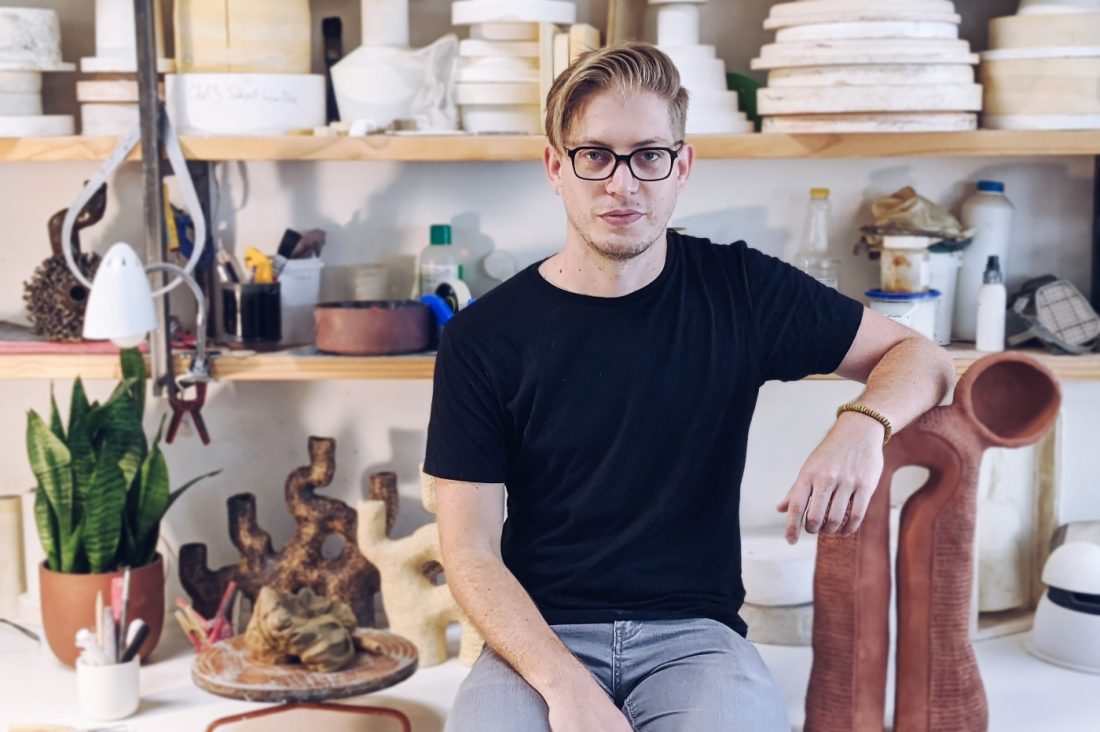 Meet the man taking the local (and international) ceramic world by storm.

Jan de Wet’s ceramic works burst onto Instagram in the August of 2020, less than a year ago and just like that his pieces entered our hearts and homes for good. It seems we’re not the only ones too, as the artist’s clay works are now being shown in France, Belgium and Switzerland, with representation by French gallery Artskop 3437. The gallery’s focus is on classic, modern, contemporary art and collectable design from Africa and its diaspora and the works of Jan de Wet feature alongside other artists of major distinction.

In the short time since Jan Ernst as a brand was born, he has collaborated on product lines with The Urbanative, Merchants on Long and Meeco Home with the latter seeing him partner with Vorster & Braye Ceramics and scaling up considerably to produce side tables, pedestals and lamps.

With his practice very much informed by his work as an established architect under the name Studio An, Jan’s perspective of form and space and the relationship between the two gives him an edge in his clay works that we love. His finely marked candelabras snake and wind, sway and turn, ostensibly coming alive with movement and a likeness to amoebous and marine life forms.

His debut collection: Candelabra consists of the Veld and Sea series, both of which have been inspired by the natural world around him and the many forms, textures and colours that shape it.

What is it that you love about working with clay?

There is something very human about it. It has the ability to see an idea come to life and take form. While it’s possible to do that with pen and paper too, you become physically involved with the making of something. Almost all of your senses are activated. It’s the sound of the clay being wedged and the smell when you open a new bag. Perhaps it’s the feeling of the material in your hands, but mostly it’s the expression of the inner self that feels so good.

What has it been like learning the skill of manipulating clay and the journey toward creating beautiful, sellable artworks? Who has helped you along the way?

The process has been very organic. When I started during lockdown, I wanted to kill time and had no idea what I was doing, I also didn’t care if it was technically correct. I just wanted to create.

Somehow the work resonated with people and I realised that I should probably take this a bit more seriously. My biggest mentor is my partner, Colin Braye. I have learned a great deal from him and through observing in his studio – Vorster & Braye. He often jokes and says my ignorance about this material is my saving grace. I try what seems to be technically impossible and I’ve had reasonable success up to this point!

Is your background as an architect a help or hindrance when it comes to ceramic work?

Architecture has influenced my work to a great extent. I look at composition and use of lines in a very similar way but get to apply this knowledge differently.Creating scale models at university has also helped to envision mass on a smaller scale. There is however more freedom in ceramics. Architecture is a profession that takes a very long time to change and adapt, we see the same old buildings popping up everywhere, and while there is beauty in uniformity, I think ceramics respond to the times a lot quicker.

Do your architectural structures share any resemblance to these organic clay shapes, or are they purposefully contrasting?

There are similarities between my architectural work and ceramics. It’s finding the sweet spot between marrying something geometric with something organic. At first glance, it may not appear that way, but it lies in the subtle curve of an entrance wall or the coarse concrete texture against a smooth timber bench. The intentions are the same, but the results different.

How does it feel to be represented by a French gallery and exhibited across Europe?

It is every designer’s dream to have their work recognised [even just locally], but when it happens on an international platform, you feel overwhelmed with a type of gratitude that is hard to describe. I am extremely honoured!

The Candelabras collection comprises of Veld and Sea. Tell us how these two local landscapes have inspired your forms, textures, and even colours.

The Veld Candelabras were inspired by a trip to Madikwe. One afternoon we drove into the veld to watch the sunset. I was sitting on the back seat of the truck (the one slightly higher than the rest) and became aware of these monolithic structures plotted in the landscape. The colour of the termite mounds reminded me of the terracotta clay I love and I knew I had to explore this shape and mud texture on a domestic scale.

The Sea Candelabras were inspired by my love for the ocean. I grew up along different parts of the coast and have always been fascinated by the sea creatures (watch out for my Ocean Pop Collection created for Merchants on Long – launching in September). There are tons of goggas with interesting shapes and textures like sponges, corals and kelp.

What’s in the pipeline beyond Candelabras, even if only an idea?

So much has happened since the beginning of the Candelabra series. I started dipping my toes into ceramic furniture and recently completed a private collection called Origin with Vorster & Braye Ceramics for London-based interior studio Meeco Home. The work comprises a 2-metre floor lamp, a desk, a bench and a side table, and all the pieces are entirely made of clay.

The floor lamp – called Sprouts – and my Eye Lamp have been acquired by Artskop gallery and will be displayed at The Collectible Art Fair 2022. At the moment I am working on a furniture range with Design Afrika. I love the idea of clay and grass used in combination and reimagining the two materials in a contemporary manner. The collection will launch in September 2021.

Artskop will be representing Jan at Collectible Salon, Brussels (which is being held online this year) from 28-30 May as well as in Bordeaux in June/ July.

** You can read other stories about Jan de Wet and his designs here and here.