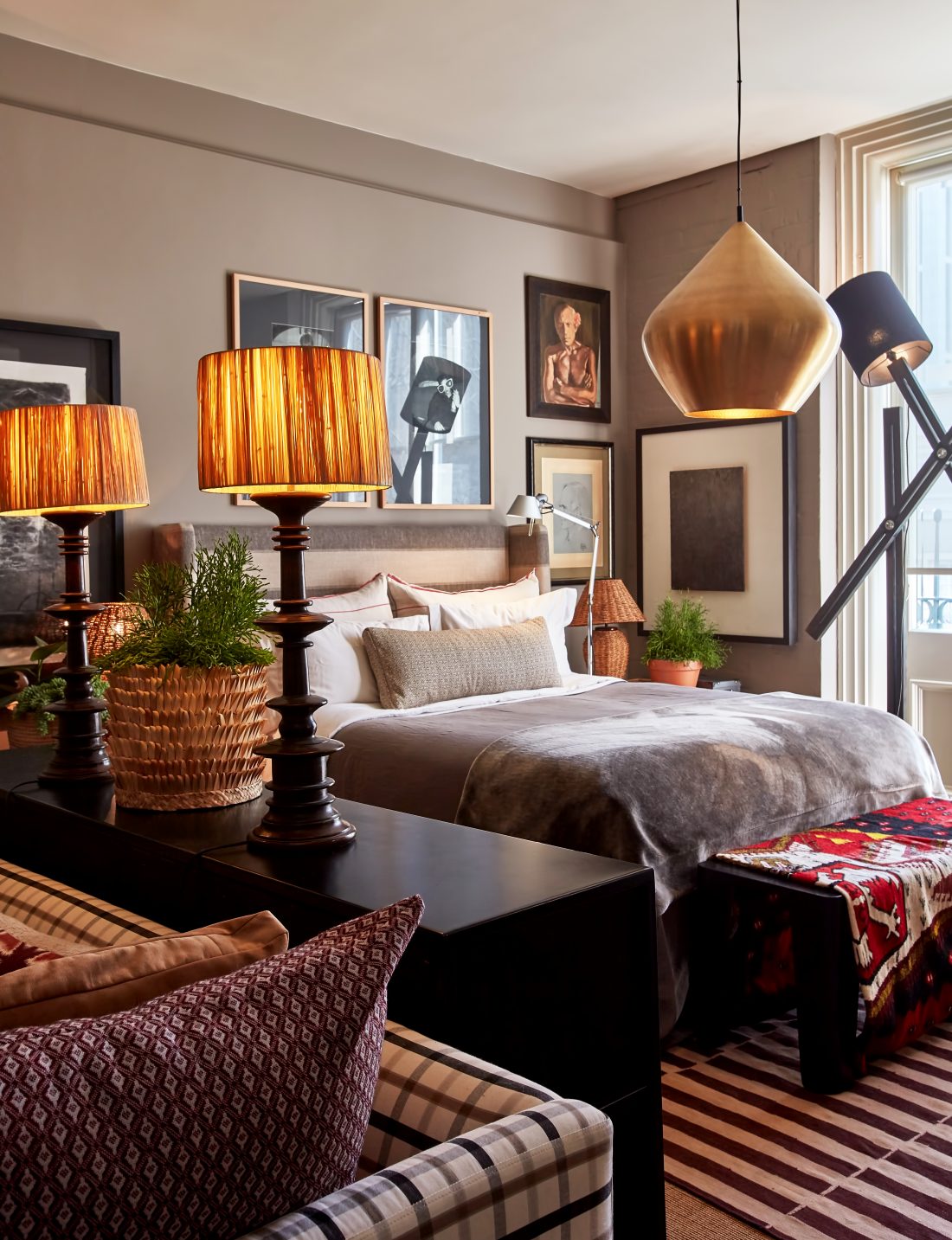 Having run Liam Mooney Studio downstairs Liam jumped at the opportunity to make this 2nd floor Hout Street apartment his own. Built in the early 1900s, thanks to its rare and generous size (150 square metres) and historical preservation such as the original tiled bathroom, it has become the envy of most Capetonian apartment dwellers. “I loved the rooms that lead on to each other (passages are my worst) and the beautiful woodwork in the doors and frames. The balcony looking over the tree-lined street was also a major drawcard,” Liam recalls.

It’s a space that prioritises comfort, celebrates local talent and is seldom the same. The latter can be put down to two things: Liam’s love of editing his domestic environment and an incredibly flexible room layout. Inheriting just one water point in the scullery would be a problem worth lamenting for most, but Liam has taken it as an opportunity to celebrate a never-settling kitchen. His kitchen moves around the apartment depending on his mood as nothing is fixed.

“The space is very ‘me’, perhaps the most me an interior has ever been,” Liam notes. He’s a self-proclaimed “compulsive collector”, a regular at auctions and second-hand stores. This has resulted in a home with a singular identity, a space filled with history and an energy that transcends the current. With a personal collection of art and objet that swells among the apartments few walls, there’s a narrative that runs through the space and maintains order. “I like unusual combinations, things that don’t match and lots of contrast; think old and new, hard and soft,” he says.

“When it came to decorating my home, I didn’t plan it as I would a commercial job. It was important to me that the space grew and evolved naturally,” he explains. Essentially, he has given the interior a chance to write its own story. “Curtains in bold colours came and went. Striking rugs delineate spaces. Colours change often,” he adds. But honest comfort is at the heart of it all: “in loads of padding, squishy upholstery, carpets underfoot and walls of soft curtains”.

On weekends you’ll find Liam on his balcony, savouring the peace that Sundays in the city bring. “It’s a magical day – everyone has buggered off and it’s quiet for a change,” he quips.

What possessions would accompany you to the grave?

Gifts, which I hold the most dear. My friend Laureen Rossouw would bring a small item from her own collection every time she came for dinner. I’ve received snooker balls, handmade ceramics and Robben Island slateware from her and I treasure them. Objects by young South African designers are special to me too: Joe Paine’s stilt lamp and Ben Orkin’s sculptural vase for example.

Any clever design tricks up your sleeve?

Taking art up to the ceiling in unusual arrangements makes a space feel double the size.

A few of your favourite sources for furniture and homeware?

COOL KIDS ON THE BLOCK ⁠ ⁠ A kids’ space as

BLASTS FROM THE PAST...⁠ ⁠ We're big fans of a

IT'S GARDEN DAY⁠ ⁠ We chat with travel writer

COCKTAIL HOUR IS NIGH...⁠ ⁠ And what better wa

MISSED OUR NEWSLETTER?⁠ ⁠ We share our six siz