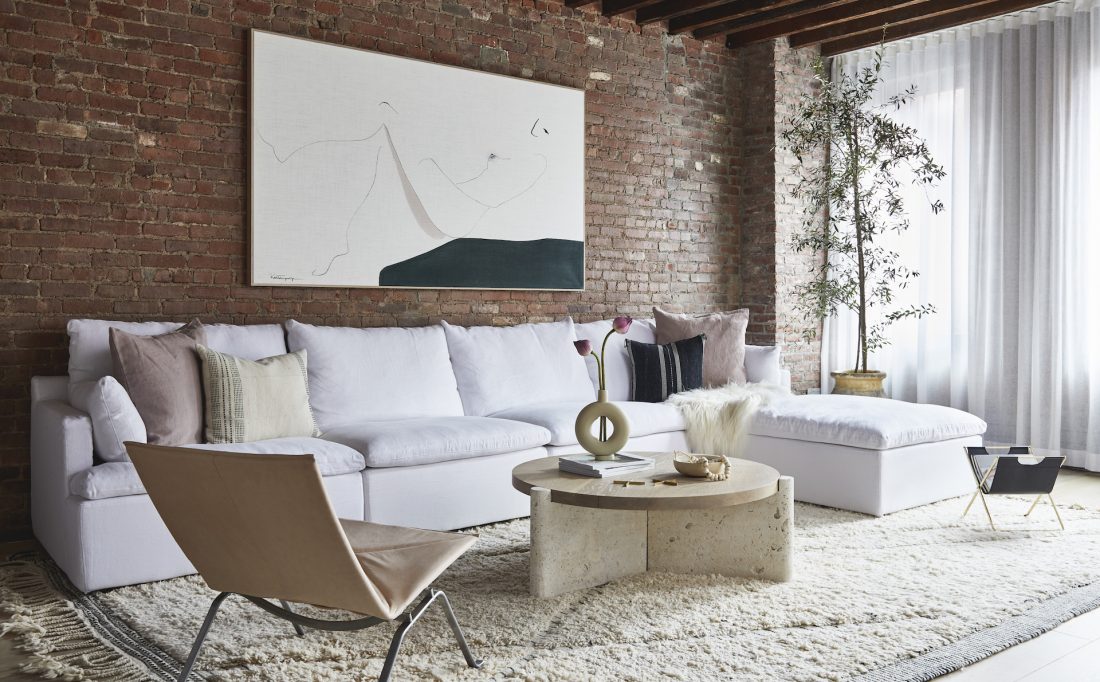 Manhattan designer Tina Rich works tried-and-tested tricks of the trade to her advantage in her design overhaul of a Soho loft. We break down the hard-working results.

When New York interior designer Tina Rich met prospective clients in their newly purchased Soho loft she immediately knew design changes were necessary. The loft had great natural light, but its uplifting effects were lost in the dark and dated interior, not renovated since the 1990s. Unquestionably in need of an overhaul were the dark floors throughout and black lacquer and cherry wood kitchen. The red brick wall running the length of the loft’s living space was a welcome feature, but its uninterrupted expanse felt relentless and overly industrial, and she feared it might be something the clients soon tired of. “This was something I felt really strongly about from the beginning, and it took some major convincing to get the client on board,” recalls Tina. Trusting in Tina’s vision of an airier, relaxed and more neutral interior, the client agreed to a number of changes, and Tina set about implementing clever tricks of the trade to deliver on her promise.

One of the first major changes Tina made was to lift the existing flooring and replace it with blonde oak hardwood. The lightness and warmth it brought to the loft was instantly noticeable, and it set the tone for some of the Scandi-inspired furniture she foresaw including in the space. A similar toned wood was used for kitchen cabinetry (most of it with finger grips rather than visible handles), and this was paired with a light, grey-veined marble. The kitchen island and countertops are constructed from this marble, and – cleverly – Tina has run the same marble up the walls into two previously boarded up window insets, a trick that shows that running marble up walls need not be a treatment solely reserved for bathrooms. By doing this, Tina has also fragmented the expanse of red brick wall. “I envisaged open shelves in the existing window insets filled with dinnerware, ceramics and accessories,” says Tina of her concept. The client’s collection of kitchenware from ceramicists including Michelle Quan, Karen Tinney and Eny Lee Parker now takes pride of place in the kitchen.

Conscious of visually regaining space that the floor-to-ceiling cabinetry in the kitchen and bedrooms occupies, Tina made a point of installing furniture, both sourced and bespoke, that is elevated off the floor level. “Having things off the ground adds an unexpected design element and draws your eye to different planes of the space,” she explains. A shelving unit in the living room and vanities in both bathrooms are examples of where seeing the floor beneath furniture tricks the eye into thinking the space is larger than it is. In the master bedroom, not only does the bedside lighting comprise suspended pendants (freeing up surface space), but the custom-made oak-and-leather bedside tables hover above the floor, adding to the sense of volume. Tina’s decision to dress the loft with rattan pieces (which include a chair in the master bedroom, and bar stools in the kitchen) along with wall hangings that have a sense of openness and movement to them, are additional tricks she turns to in order to increase spacial awareness.

Tina and her client settled on a palette of dusty pinks, greige and sage green. It was felt that not only do these shades add a mood of Mediterranean warmth to the loft, but they also complement the existing warm tones of the brick walls and, in some spaces, the dark ceiling beams. Tina’s use of her palette is restrained – travertine tables in biscuit tones are dotted around the loft, with artworks and ceramics in similar neutral shades. Pinks are used sparingly, mostly in fabric on cushions, and in the master bedroom in a bolder shade in a rug complete with its own backstory. (Tina recounts how both her and her client fell in love with the rug, but when she went to purchase it the rug had already sold. Fate on their sides, a month later she spotted that the new owner of the rug had put it up for sale, and so Tina snapped it up for the loft.) Separating the guest bedroom from the dining area, sage curtains line black-framed doors, their green shade repeated in the leaves of Tina’s choice of indoor plants. A subtle use of black – visible in the door and window frames, as well as in the bar stools and lighting and in the bathroom shelving – counterbalances the feminine palette and ramps up the industrial, masculine aesthetic.

Tina’s immediate reaction to the loft space on first visiting it, and her instinct to push her clients to consider and implement changes that may have initially seemed counter-intuitive to them, has paid off. The once horribly out-of-date loft, post Tina’s makeover, feels light, warm and welcoming – a breath of fresh air amid Soho’s high-density living.