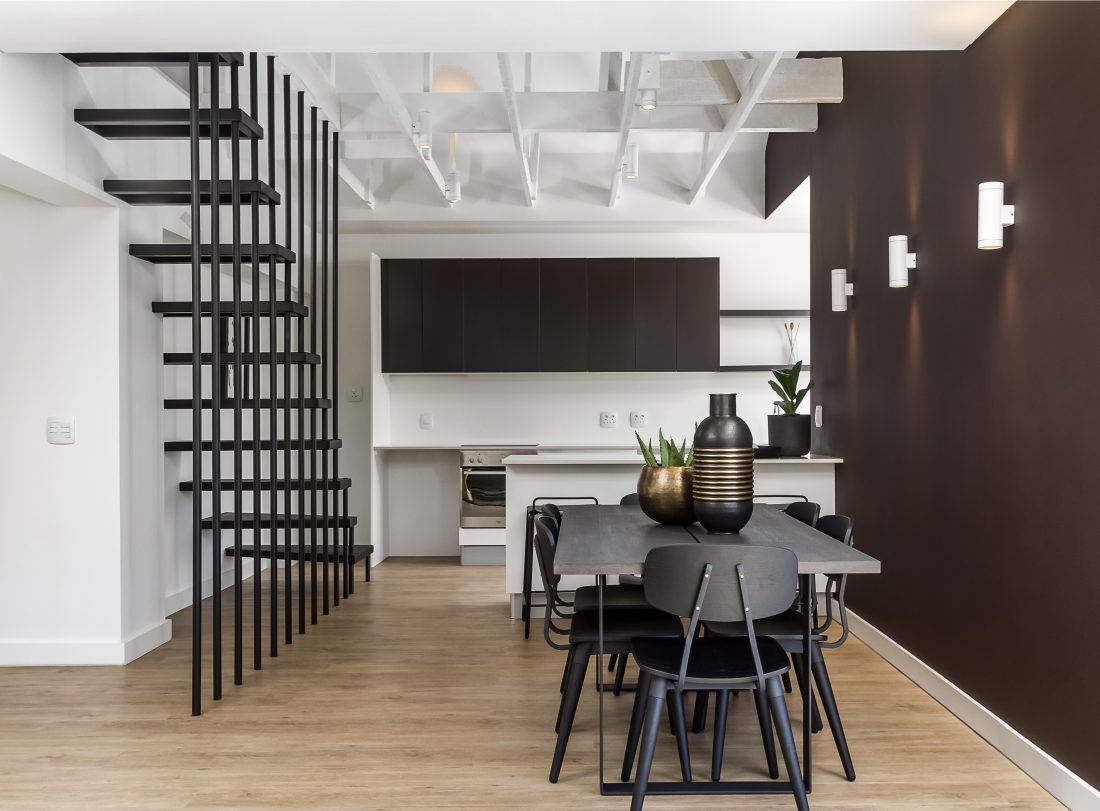 A vertical renovation into an apartment’s unused roof converts a dated space into a contemporary, entertainer-friendly home.

Little did Atlantic Seaboard-based architect John Fraser Frame-Tolmie know that a chance interaction between his own toddler and that of a stranger in the Green Point Urban Park would result in his working on a compact but challenging renovation. The young family with whom his daughter engaged had recently moved to the neighbourhood and were on the hunt for an architect to work with them on the redesign of their newly purchased apartment, mere minutes from John’s own home. Situated on Green Point’s Main Road, their new home was in an old building and in need of a major overhaul. While north-facing, it was, as they put it, “dark and poky, mostly because of a floor plan that reflected an outdated way of living.”

Their brief to John, who cut his teeth working for internationally renowned architects SAOTA and now heads up his own practice FrameWork Design, was multifaceted. It included a major structural rework intended to gut the poky interconnecting rooms and replace them with one space-maximising entertainment area. Additionally, a second bathroom was required in order to make both bedrooms en suite. Finishes and fittings throughout were to be contemporary and hardwearing. And finally, the couple, having obtained trustee permission, were super keen to extend their home upwards into the pitched roof in order to convert the newly gained space into a home office.

It was this challenge that piqued John’s interest most, and it’s this vertical expansion that adds, not just airiness and light to the living space, but drama too. Against a largely white backdrop, save for warm charcoal-toned cabinetry and a feature wall in the same colour, is an architectural staircase of matt black metal treads and with a balustrade of metal bars. It leads up to the home office, which doubles as a guest bedroom, and is lit by skylights.

“It is an intentionally delicate staircase,” says John. “I love how it draws the eye upwards into the network of trusses and provides an equally graphic view of the kitchen and dining areas on descent.”

In the pre-renovation apartment, the master bedroom stood where the kitchen now does, with a door leading onto the sea-facing balcony also shared by the original living space. Working closely with contractor Neill Marsilio of Phase Three Property Development, John decided to retain both balcony doors, thereby increasing ventilation in the sunny entertainment area as well as creating a practical indoor-outdoor flow. “In an old building where kitchen and balcony were once apart, it’s convenient being able to prepare cocktails in the kitchen and then head directly outdoors to enjoy them,” says John.

We’ll toast to the thinking behind that.